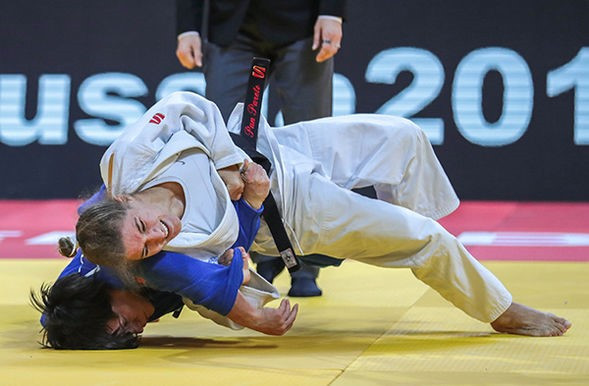 Rio 2016 Olympic champion Paula Pareto of Argentina was one of the five winners on the opening day of the International Judo Federation (IJF) Grand Slam in Russian city Ekaterinburg, beating Spain's Julia Figueroa in the women's under-48 kilograms final at the Palace of Sports.

Pareto, who was also a bronze medallist at Beijing 2008, defeated the Marrakech Grand Prix winner in golden score to win her second IJF Grand Slam title.

The 33-year-old marginally outworked Figueroa, who received her third shido in added time to hand the gold medal to her opponent.

The former Baku Grand Slam winner floored Perez Box, who was appearing in an IJF Grand Slam final for the first time, with a ko-uchi-gari.

It was one of the best ippons on day one of competition.

The first bronze medal was awarded to Belgium's Charline Van Snick at the expense of Portugal's Joana Ramos.

Russia's Natalia Kuziutina took the second with compatriot Daria Bobrikova unable to compete due to injury.

The one other women’s gold medallist was Canada's Christa Deguchi after she overcame Chinese Taipei’s Lien Chen-ling to win the under-57kg final.

Deguchi pinned down Lien for 20 seconds to seal her second IJF Grand Slam title in as many months having won in Paris in February.

Tokyo-based Lien was supported by fans from her company team, Komatsu, but lost out to the in-form former Japanese international.

Japan's Haruka Funakubo secured the second as Austria's Sabrina Filzmoser missed out on a podium place.

The world number 169 was unseeded but proved too strong for his experienced opponent, who received his third and final shido in golden score for ducking under the grip of Lkhagvajamts.

The first bronze medal was won by The Netherlands' Tornike Tsjakadoea to the disappointment of Georgia's Lukhumi Chkhvimiani.

Russia's Albert Oguzov came away with the second after fellow countryman Islam Yashuev was restricted from taking part after his direct hansoku-make.

Both judoka were in unchartered territory as they graced an IJF Grand Slam final for the first time and it was Le Blouch who had the decisive say as he caught the home judoka with an o-uchi-gari for a waza-ari score.

The first bronze medal was won by Israel's Baruch Shmailov with success over team-mate Tal Flicker.

Action in Ekaterinburg is due to continue tomorrow.

Competition will then conclude on Sunday (March 17).