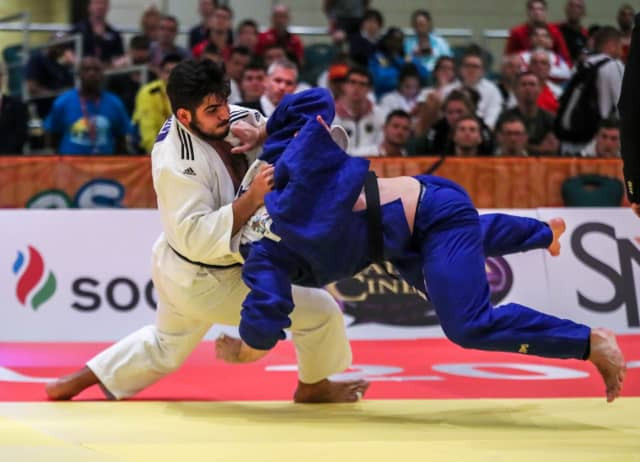 The stars of the International Judo Federation's World Tour are set to be out in force at the Ekaterinburg Grand Slam this week, with Georgia's Gela Zaalishvili being one of a new generation of young judoka ready to build on already high reputations.

The 19-year-old, the world junior champion, is matched against another hugely promising young talent in the first round of the men's over-100 kilograms category, namely Japan's 21-year-old defending Grand Slam champion Ota Hyoga at the Palace of Sports DIVS,

Düsseldorf Grand Slam winner Conway is one of the favourites for gold at the Palace of Sports but will not be underestimating the world number 26.

The young Grand Slam debutant will provide a challenging opening test to Nagase's season as the latter sets his sights on the road to Tokyo 2020.

But the 19-year-old already holds a win over reigning world champion Saeid Mollaei of Iran, who he threw twice, first with a tsuri-goshi and then a tsurikomi-goshi, and he has nothing to lose in Saturday's (March 16) exciting second round meeting.

Aguiar won her first gold medal since her 2017 world title victory when she captured top spot at the Düsseldorf Grand Slam in February, and she is going for a third consecutive Grand Slam medal.

But Yeats-Brown, a former gymnast and rugby player, has been something of a revelation since making the unexpected move up from under-70kg to under-78kg last year.

She already holds wins over former world champions Audrey Tcheumeo of France and Marhinde Verkerk of The Netherlands, as well as European champion Madeleine Malonga of France.

The Briton may be the shortest and lightest judoka in the category but what she lacks in size she makes up for in determination.

The men's under-100kg holds out the enticing prospect of a meeting between 31-year-old Olympic bronze medallist and four-times Grand Slam winner Cyrille Maret of France, who has been out of the IJF medals for a year, and Canadian youngster Shady Elnahask.

The 20-year-old Elnahas was an Osaka Grand Slam silver medallist.