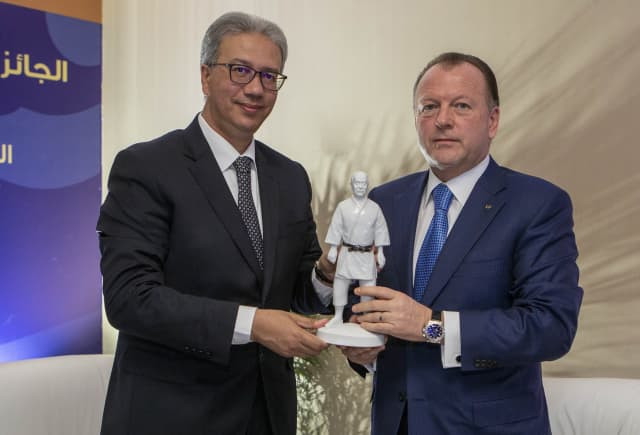 The Opening Ceremony took place ahead of the final block on day two at the Marrakech Exhibition Centre and immediately followed a landmark contract signing between the IJF and the host country.

Marius Vizer, IJF President, presented Karim Kassi-Lahlou, Governor of Marrakech, with a figure of judo founder Jigoro Kano before putting pen to paper on a new deal which will see a new training centre in Marrakech and the introduction of the IJF's Judo for Children programme in 40 schools.

Rachid Talbi Alami, Minister of Sports in Morocco, said: "Today we signed a deal with the IJF for the Judo for Children programme to start at 40 schools and we're all very proud."

The first bronze medal contest was won by Geke Van Den Berg of The Netherlands after France's Maelle Di Cintio could last only a minute because of a knee injury.

Pinot threw for a waza-ari score and reacted first on the ground to submit her opponent with a juji-gatame.

But for Fletcher it was a career-best result which will push her towards an Olympic qualification position.

The second bronze medal was won by Elisavet Teltsidou of Greece, who beat Australia's Aoife Coughlan with a huge hip throw after 24 seconds for ippon.

The first bronze medal was won by Tashkent Grand Prix winner Khikmatillokh Turaev of Uzbekistan, after Bilal Ciloglu of Turkey received his third shido and was disqualified in golden score.

Bulgaria's Ivaylo Ivanov showed he was back among the world's elite as he beat world bronze medallist Vedat Albayrak in the men's under-81kg weight category.

The first bronze medal was won by former Samsun Grand Prix winner Damian Szwarnowiecki of Poland, who beat a stunned Antoine Valois-Fortier of Canada in 53 seconds.

The second bronze medal went to Alexios Ntanatsidis of Greece who dominated Uzbekistan's Sharofiddin Boltaboev with two waza-ari scores without reply to claim Greece's second medal of the day.