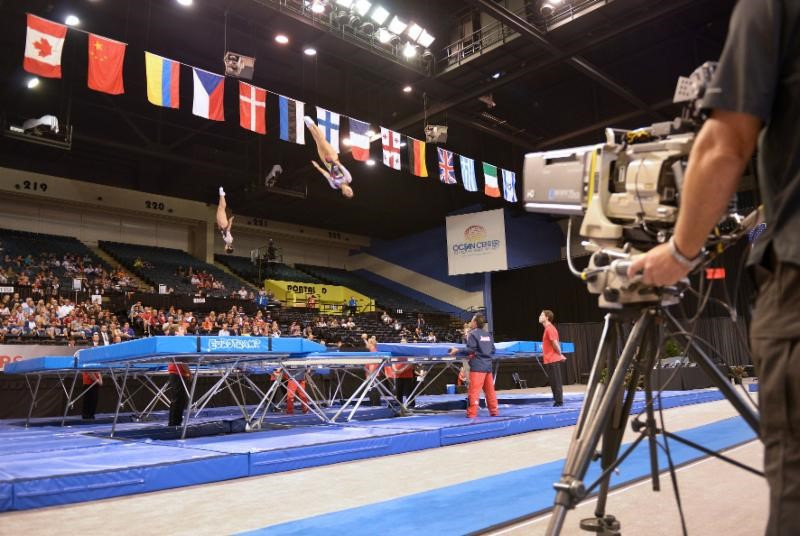 This year's Trampoline Gymnastics World Championships are scheduled to get underway in Saint Petersburg tomorrow with the Russian city’s Sports and Concert Complex playing host to four-days of competition.

The disciplines of trampoline, tumbling and double-mini will all feature on the programme as the event returns to what is one of the largest and most prestigious venues in Europe.

The Sports and Concert Complex also hosted the 2009 edition of the Trampoline Gymnastics World Championships.

Among those who will be looking to make their mark this year is home favourite Yana Pavlova, who last month wrapped up victory in the 2017-2018 Trampoline Gymnastics World Cup series.

Pavlova’s World Cup success was built largely on her outstanding displays in 2017.

In total, she amassed 308 points and five top-three finishes across the series, but her two gold medals, in Belarus’ capital Minsk and Loulé in Portugal, were won last year.

"In 2017 I became a stronger trampoliner," Pavlova said.

"I made every effort to achieve it."

Having won synchronised gold with Victoria Voronina at the 2014 European Championships in Guimarães in Portugal and with Anna Kornetskaya at the 2015 European Games in Baku in Azerbaijan, Pavlova will be going for the world title in Saint Petersburg with another partner, Irina Kundius, who is returning to competition after giving birth.

In the team competition, the Russian women will be among the favourites, with Belarus, Canada and 2017 world champions China likely to be their main rivals.

"I’m a little nervous but I’m also confident," Pavlova, a world team bronze medallist in 2015 as well as the individual gold medallist at Baku 2015 and the 2016 European Championships, said.

"I’d like to be on the podium both in individual and synchronised trampoline, and in the team competitions.

"There are chances for all of those things."

Other names to look out for include China’s Gao Lei, who will have the chance to complete a historic hat-trick of world titles.

Only Russia's Alexander Moskalenko, Sydney 2000 Olympic champion and ambassador for the 2018 World Championships, has ever won three trampoline world titles in a row, and the last of those was in 1994.

A strong challenge is expected to come from Gao’s compatriot Dong Dong, an Olympic, world and Asian Games gold medallist

Gao beat Dong back into bronze medal position at last year’s World Championships in Bulgaria's capital Sofia, but lost out to his rival at the 2018 Asian Games in Jakarta in Indonesia.

The Chinese duo will also be contending with the likes of 2017 world silver medallist Dmitry Ushakov of Russia.