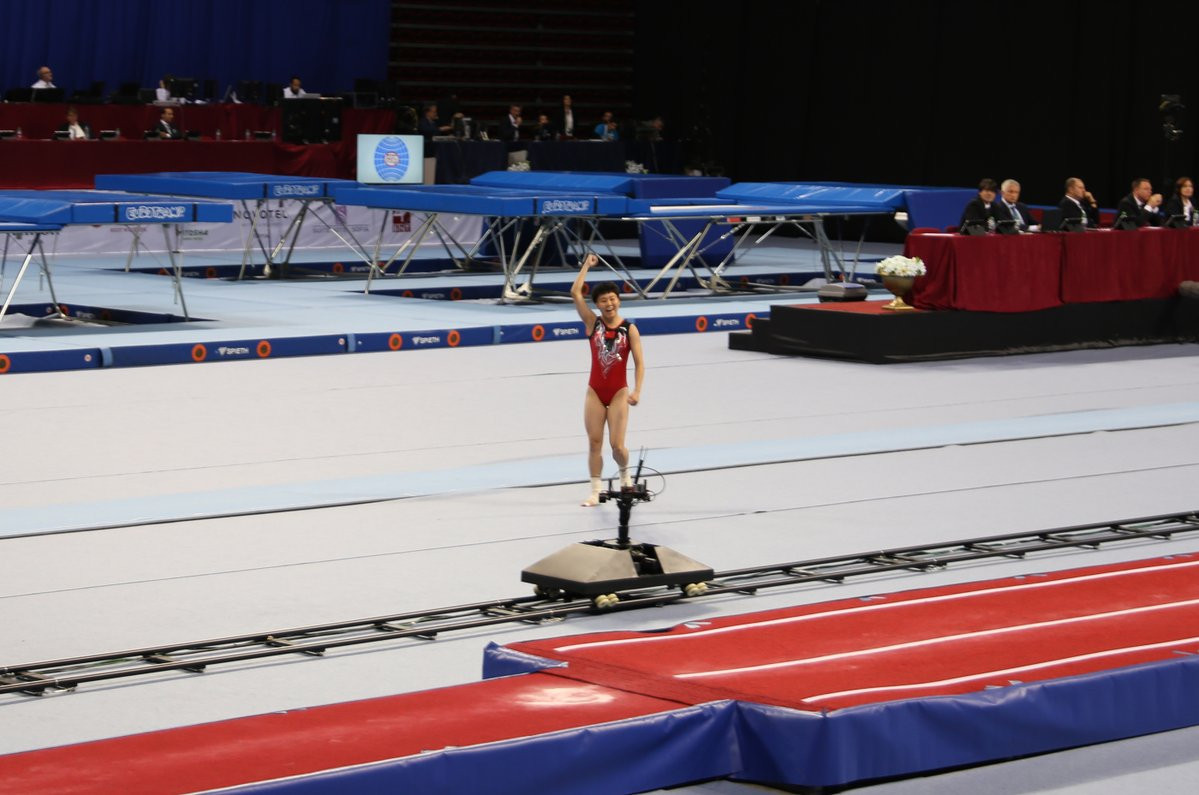 China's Jia Fangfang equalled the record for the number of women's individual tumbling victories as she sealed her fourth title at the Trampoline Gymnastics World Championships in Sofia.

Jia, a member of the Chinese trio which won the team gold medal yesterday, moved level with Anna Korobeinikova of Russia and France's Chrystel Robert at the top of the all-time list by virtue of another superb performance at the Arena Armeec.

The Chinese star topped the podium with a total of 72.300 points, 0.200 in front of Korobeinikova, who had to settle for silver.

Zhong Xingping and Zhu Xueying also claimed their second titles of the World Championships in the Bulgarian capital as they teamed up to earn gold in the women's synchronised trampoline competition.

Zhong and Zhu proved far too strong for the rest of the field, as their score of 50.200 was nearly a full two points more than silver medallists Hikaru Mori and Yumi Takagi of Japan.

Tatsiana Piatrenia and Maryia Makharynskaya secured bronze for Belarus on 47.600.

Their compatriots Uladzislau Hancharou and Aleh Rabtsau ensured the country topped the podium today, after they finished in first place in the men's synchronised trampoline event.

Hancharou, the Olympic individual champion, ended his wait for a world title as the duo combined for a score of 52.800.

Luke Strong and Nathan Bailey of Britain were the recipients of silver after their routine yielded 52.250 points, while Russia's Dmitrii Ushakov and Andrey Yudin's total of 51.700 was enough for bronze.

Britain claimed their first triumph of the event in Sofia as Greg Townely, Elliot Browne and Kristof Willerton earned their first men's tumbling team crown for 14 years with a score of 112.500 points.

Their total saw them beat Zhang Luo, Meng Wengchao and Zhang Kuo of China, who were relegated to silver having managed a total of 111.300,

Russia swept the double mini trampoline titles on offer today as they finished at the summit of the pile in the men's individual and women's team events.

Mikhail Zalomin clinched his third individual crown after scoring 78.800, 0.500 ahead of silver medallist Austin Nacey of the United States.

Dana Sadkova, Alina Khristenko and Polina Troinova then delivered the women's team gold medal for Russia after their high-flying routines were rewarded with 104.900 points.