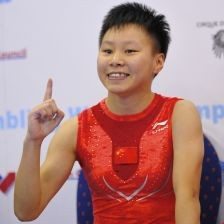 China's Gao Lei came out on top in the men's trampoline final at the 32nd Trampoline Gymnastics World Championships 2017 in Sofia.

The 25-year-old finished ahead of Dmitrii Ushakov with a score of  62.280 points to finish ahead of the Russian's score of 62.005 at the Arena Armeec in Bulgaria's capital.

Third was another Chinese gymnast, Dong Dong, who took the bronze medal with a score of 61.540 points ahead of fourth-placed Allan Morante, of France and Sergei Azarian, of Russia.

Fourth was Lea Labrousse, of France, with 54.865 with Maryia Makharynskaya, of Belarus in fifth.

The men's tumbling was won by China's Kuo Zhang with a score of 76.800 points, in front of Denmark's Anders Wesh, who scored 75.500 and Great Britain's Elliott Browne, who won the bronze medal with an identical score on a tie break rule which adds the total execution scores.

Fourth was Denmark's Rasmus Steffensen, with 75.300 points, and fifth was Great Britain's Kristov Willerton with 74.700.

The women's double mini trampoline was won by South Africa's Bianca Zoonekynd with a score of 68.900 points ahead of Russia's Polina Troianova, with a score of 67.800 with Lina Sjoeberg, of Sweden, in third with 67.200.

Fourth was Australian Braida Thomas with 67.000 points and Hally Piontek, of the United States was fifth with 64.700.