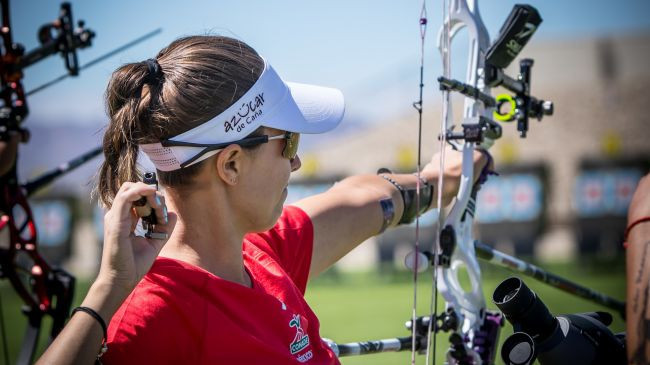 Mexico's Linda Ochoa-Anderson will have another shot at winning her first-ever individual gold medal at an Archery World Cup stage after reaching the women's compound final in Salt Lake City in the United States.

The 31-year-old beat France’s Sophie Dodemont 145-144 in the penultimate round to set up a showdown with Colombia’s Sara López.

Ochoa-Anderson's third and last appearance in a final came in Shanghai in China in 2015, when she lost 149-145 to López.

"This is what I practise for," the world number eight said.

"I shoot a lot of tournaments, especially here in the US, but my goal is always the World Cup so it feels good to be in the finals for gold."

López defeated the Philippines’ Amaya Amparo Cojuangco 147-138 in the other semi-final at the Easton Salt Lake Archery Center.

Cojuangco and Dodemont will contest the bronze medal match.

In the men’s compound event, India’s Abhishek Verma marked his 28th birthday by reaching the final with a hugely impressive 150-146 win over Russia’s Anton Bulaev.

Awaiting him in the final is world number one Stephan Hansen after the Dane overcame home favourite Braden Gellenthien 146-145.

Bulaev and Gellenthien will battle it out for bronze.

There is also an Indian finalist in the women’s recurve event thanks to Deepika Kumari’s 6-4 victory over The Netherlands’ Gabriela Bayardo.

Standing between her and the gold medal is Germany’s Michelle Kroppen, who beat Chinese Taipei’s Tan Ya-ting by the same scoreline in the other semi-final.

The bronze medal match will be between Bayardo and Tan.

Bayardo will become the first women’s recurve archer from The Netherlands to contest a World Cup medal.

The Dutch also have a chance at a gold medal in the men’s recurve event with world number five Steve Wijler through to the final.

Having earlier upset third seed Brady Ellison of the US in the third round, Wijler defeated France’s Thomas Chirault 7-3 in the semi-finals.

The other last-four encounter pitted Italy’s Mauro Nespoli against Australia’s Ryan Tyack with the former triumphing 7-3.

Tyack and Chirault will face off in the bronze medal match.