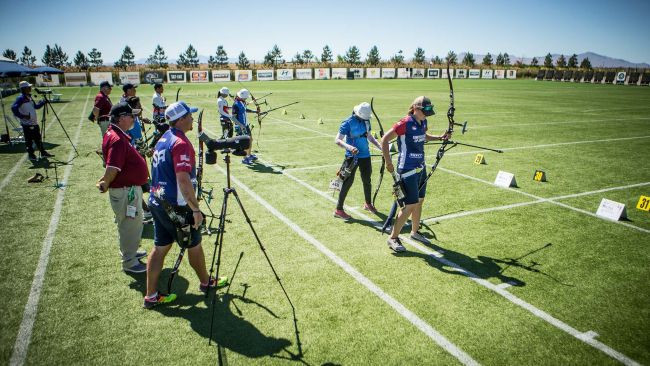 Hosts the United States made their first Hyundai Archery World Cup final in Salt Lake City, after Brady Ellison and Mackenzie Brown beat India in the semi-finals of the mixed team recurve today.

It was another day of tough conditions with strong winds again creating a challenge for the archers at the Easton Salt Lake Archery Center.

Ellison and Brown are now due to play the Russian pair of Natalia Erdynieva and Arsalan Baldanov, who knocked out the favourites Chinese Taipei in the semi-finals, for the gold medal on Sunday (June 24).

"Mackenzie and I shot well today, we shot some good scores, especially for the wind we have," said Ellison.

"I really hope to be bringing home the gold medal here."

It was a tense semi-final with the match tied at four set points each after four sets.

In the end though Brown’s nine and Brady’s eight were enough to beat India in the tiebreaker after Deepika Kumari shot a wide six in the challenging windy conditions.

"In those situations you always want to put your best shot down there and you want to shoot a 10, but the main goal is to shoot a good enough shot to not lose the match," said Ellison.

They won their first World Cup medal as a pair in Shanghai in 2014.

Brown claimed they "deserve" to win the gold on Sunday.

It was a largely positive day for America's archers all round.

In the second round of the men's recurve 18-year-old Jack Williams, the world number 143, comfortably saw off Chile's Andres Aguilar, ranked 80 places above him, 6-0.

Unlike Williams, Requa was the higher ranked archer in that match and was expected to win.

In the women's recurve an all-American match up in the first round saw another surprise result as 32-year-old and world number 389 Erin Mickelberry beat La Nola Shepard, ranked 143rd.

That match finished 7-3 to the underdog.

Tomorrow's events are due to see the semi-finals of the individual competitions take place.

Before that, American Jack Williams will face Canada's Crispin Duenas in round three of the men's recurve.

Williams will need another top performance to win that match, with Duenas ranked 11th in the world.

In the women's recurve America's Erin Mickelberry has been rewarded for today's win with a draw against another world number 11, India's Deepika Kumari.