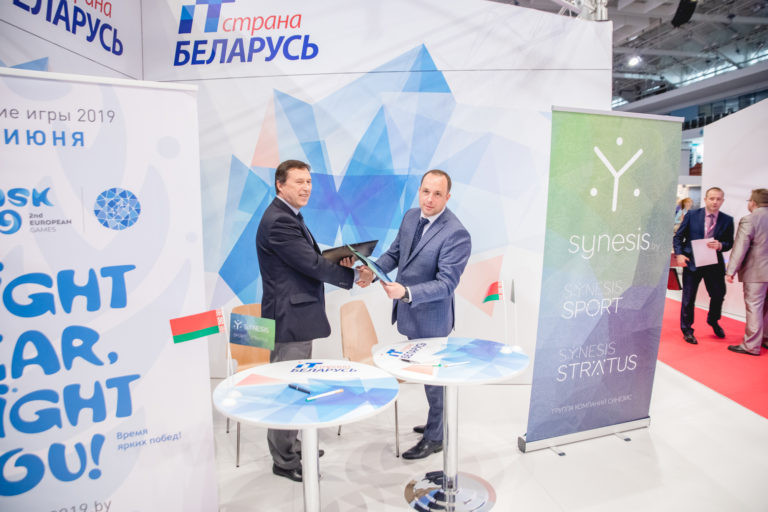 Belarusian IT company Synesis Sport will create software and hardware units for the Minsk 2019 European Games after reaching an agreement with the multi-sport event’s Organising Committee.

Under the terms of the contract, which was signed during the international forum on telecommunications and banking and office technologies in Belarus’ capital, will also see the company develop the official Minsk 2019 website.

Among them is timing and scoring and the Games' management system, which consists of 13 services, including accreditation, accommodation, human resources, and arrivals and departures.

Also covered will be the Intranet, reprography, the organisation and functioning of the central technical operations, and the functioning of internet services.

Programmes and services for each of the aspects will be created by a separate team of developers and consultants.

They will also integrate them with the existing development.

"Being such a complex, functional, multi-sport event as the second European Games are, it sets certain goals that might be achieved according to modern standards," Minsk 2019 chief executive George Katulin said.

"It also involves the processes of coordination of the various departments and areas of work of MEGOC (Minsk 2019 European Games Organising Committee).

"It includes, for example, transportation management, coordination of arrival and departure, the television broadcast.

"It should be done according to the rules of the relevant International Federations.

"The Games will involve 15 competition venues and have huge infrastructure serving them.

"All that relies on information technologies."

Synesis Sport director Dmitry Shwedko added: "It had never happened before that Belarusian companies created IT solutions for such large-scale sport events.

"Our offer was several times cheaper and more innovative than the main player in the market that organised such events for over 30 years.

"We have proposed a completely new system of management and organisation, which after the European Games can be used for any type of event.

"It may be the Olympic Games and other forums for hundreds of thousands of spectators."

Last week, it was announced that free internet access is set to be provided at Minsk 2019.

According to the Belarusian Telegraph Agency, the country's Communications and Information Minister Sergei Popkov confirmed free wifi would be installed.

The wifi is expected to be made available at venues, hotels and the Athletes' Village during the duration of the Games.

In September, Katulin stated that the European Olympic Committees had expressed minor concerns with the Athletes' Village, and insisted wifi should cover the largest area possible.

It is claimed that upgrades are set to be made to ensure there is improved 3G and 4G coverage in Minsk during the Games.

Further efforts are reportedly being made to fend off the threat of cyber attacks on systems at the multi-sport event.

Pyeongchang 2018 was hit by a cyber attack during the Winter Olympics earlier this year, while 2018 Asian Games organisers Jakarta and Palembang have expressed concerns about suffering a similar disturbance.

It is claimed that around 4,000 athletes and 2,000 coaches will attend Minsk 2019 from the 50 European National Olympic Committees.

Organisers are also reportedly expecting more than 1,000 judges and a similar number of media for the event, which will run from June 21 to 30.