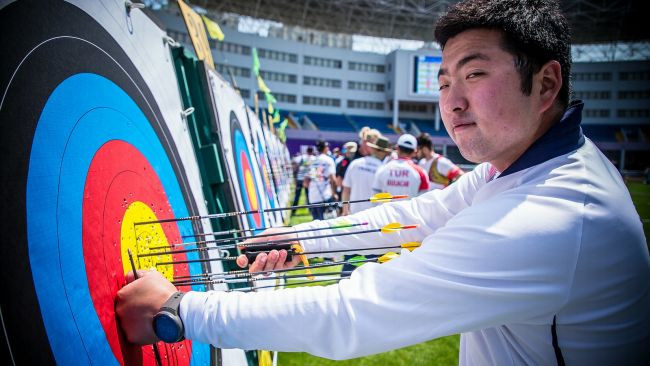 South Korean archers claimed the top spots in all five recurve qualification competitions at the 2018 Archery World Cup at the Yuanshen Sports Stadium in Shanghai.

World number one Kim Woojin, who won a gold medal at the team event at the Rio 2016 Olympics, finished top of the standings in the men's competition after scoring 689 out of a possible 720 points.

Following his successful day, Woojin stressed that he was looking to perform better than he did at last year’s event, where he had to settle for silver.

“I am satisfied with my score but my feeling was okay, I want to focus more to achieve better results,” he said.

Kang Chae Young topped the standings in the women's competition with a points total of 675.

South Korea also finished in the top seedings in all three team events.

The men's team scored 2047 points to put themselves ahead of The Netherlands and Kazakhstan whilst the women's total of 2021 was enough to see off competition from Chinese Taipei and Russia.

South Korea's mixed recurve team also finished top of qualification thanks to a points total of 1364.

Chinese Taipei and India finished second and third with points totals of 1346 and 1334, respectively.