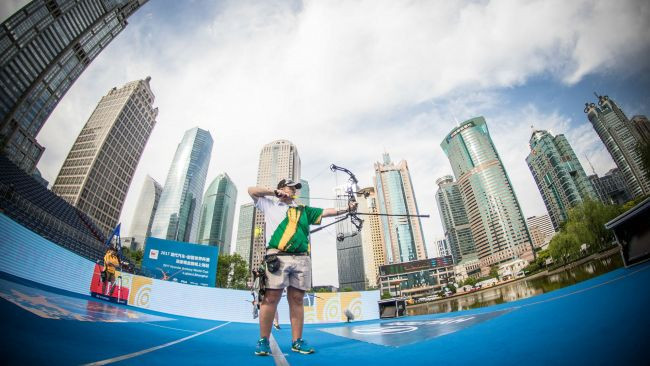 As per tradition, Shanghai will be the scene for the start of the 2018 Archery World Cup, with athletes hoping to get their campaigns off to a good start.

This will be the 10th consecutive time that the city has hosted a leg of the World Cup tour with 359 archers set to descend on the city from tomorrow until next Sunday (April 29).

Out of the four defending stage winners, however, only two will be attendance at the Yuanshen Sports Stadium.

Steve Wiljer of The Netherlands, who burst onto the scene last year and produced an excellent performance to beat South Korea's reigning champion Kim Woojin at last year's event in Shanghai, is one of those two and he will be hoping to defend his men’s recurve gold.

Defending women's compound champion Sara López of Colombia will also be looking to get off to an impressive start in China.

Those not returning are South Korea's Ki Bo Bae in the women's recurve and men's compound stage defender Stephan Hansen of Denmark, leaving the field wide open to other archers to make a name for themselves.

All six of the team champions from last year's event in Shanghai will be in attendance.

In the recurve event, Kazakhstan and Russia will be looking to keep hold of their men's and women's titles, respectively, while Chinese Taipei will be hoping to retain the mixed title.

India will be looking for more success in the men's compound and South Korea will attempt to defend both the women's and mixed titles.

The upcoming World Cup tournament has implications for this year's Asian Games in Jakarta in Indonesia, with national squads for the event likely to be selected on the back of good performances.

The weather forecast for the outdoor event does not look promising for the opening days with rain likely to come down.

The finals, due to take place at Lujiazui Central Green, however, should be dry.