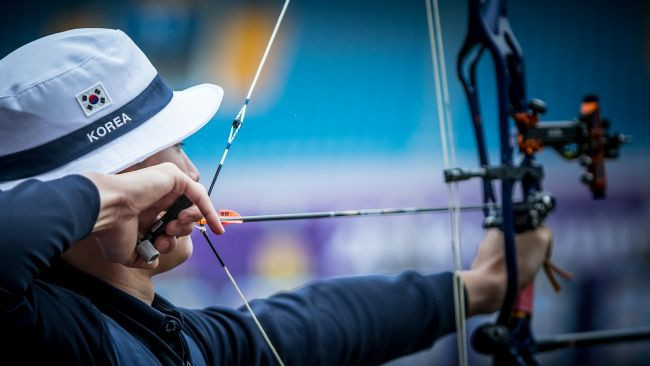 Three archers were all tied on 710 points out of 720 following the first qualification round of the men's compound event at the 2018 Archery World Cup at the Yuanshen Sports Stadium in Shanghai.

South Korea's Kim Jongho, Mike Schloesser of The Netherlands and India's Abhishek Verma all shot for 710 on the first morning of the competition.

Jongho, however, took the first seed with a score of 31x with Schloesser and Verma ranked second and third on 28x and 18x respectively.

Two-time World Cup gold medallist Schloesser revealed the weather, and particularly the shifting winds, played a large part in his inability to finish top of the pile.

"I had some struggles in the first half; I shot some really good shots and they were just out.

"I couldn’t explain them: they were really good shots and they were out – so I was thinking, 'What am I doing?'

"I was really hoping for more."

A South Korean archer also finished top of the leaderboard in the women's compound qualification thanks to Choi Bomin's efforts, which saw her score 702.

Like Schloesser, Choi also admitted she struggled with the wind.

"At the start, I couldn’t focus because I was worrying about the wind," she said.

"For the second-half, I decided to only think about my technique and performance.”

South Korea made it a clean sweep of top qualification finishes thanks to victories in the team events - the compound men's, women's and mixed team competitions.

The Archery World Cup is due to continue tomorrow with recurve qualification set to get underway.