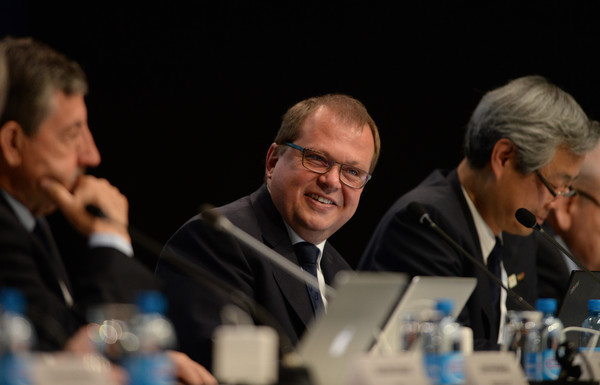 In December 2016, the International Olympic Committee (IOC) agreed to add three break dancing events to the schedule for the event in Argentina's capital.

A total of 12 dancers will compete in both the male and female competitions and there will also be a mixed team event.

"We are quite on track with the preparations for the Youth Olympic Games," Hinder told insidethegames here at SportAccord Summit.

"It brings a new dimension to the Youth Olympic Games and therefore we can also be excited that we can now be part of the project.

"We are really happy that we could do it in such short time.

"From the first moment the idea came up in 2016, initiated by some members of ours to include urban dances, until the moment the IOC Executive Board took the decision in December 2016.

"Everything is organised so from that perspective we are really happy with where we are now.

"Now we can’t wait for the great moment."

Ashli Williamson, chair of the WDSF Athletes’ Commission, claimed the athletes are "ecstatic" about having the opportunity to compete at Buenos Aires 2018.

"They’re so excited about doing it," she told insidethegames here.

"It doesn’t matter whether they make it or they don't make it.

"Everyone’s excited that we are finally getting close now."

In May 2017, the WDSF claimed to have become the first International Federation to implement an online qualifying process for an Olympic sport.

It required interested "b-boys" and "b-girls" to upload a 45-second video clip of themselves in action.

This first stage of qualifying was open to break dancers worldwide, with no restriction other than age to be able to compete at Buenos Aires 2018.

A pool of esteemed judges, which includes break dancing legends Crazy Legs and Storm, was then tasked with determining which athletes would move on to the next stage of qualification.

After regional qualifiers late last year, the stage is now set for the 60 best b-boys and 30 best b-girls to vie for the 24 YOG quota places on offer at next month’s World Championships in Tokyo.

"In our first level of the process, we had 1,000 athletes who qualified through a digital platform for the next level of qualification.

"At the very beginning, everybody was saying, 'How can this be?

"It worked very well and it’s interesting that we even found athletes across the world where we did not know we had athletes.

"So this new innovation is a completely different approach to the world of sport and specifically to the youth."

In January 2017, the WDSF hit back at claims it exploited break dancing as a "Trojan horse" to "get its foot in the door of the Olympics".

The accusation was made in a petition entitled "Get the WDSF's Hands Off Hip-Hop", which was sent to the IOC, and called for the WDSF to be expelled from the Association of IOC Recognised International Sports Federations.

The petition was set up by Serouj Aprahamian - a Lebanese-Armenian breakdancer and political activist who grew up in Los Angeles in the 1990s - through change.org.

The petition said the WDSF has "absolutely no connection or credibility with any legitimate entity in the worldwide breaking community" and stated it is a "travesty and a scandal" that Buenos Aires 2018 and the IOC "have allowed these impostors to oversee breaking at the Youth Olympics".

The WDSF responded by encouraging those people who often cast the body as a "ballroom" organisation to look back at the 2013 World DanceSport Games in Taiwanese city Kaohsiung, where more than 20 different events in 14 disciplines were contested under the unified brand "DanceSport".

The inaugural edition of the Games "visualised best what the 'DS' in our acronym stands for", according to WDSF, which followed up the event by beginning work on its 2020 VISION - a plan that defines the future strategies for DanceSport's continued development and growth in popularity.

"It’s important to make note that back in 2013, we had breaking on our World DanceSport Games," Williamson said.

"This is exactly what the athletes also felt at this time.

"But once they realised that all the respected legends were part of the WDSF and part of this project, then everything settled down again."

Karate and sport climbing was added to the sports programme at the same time as break dancing.