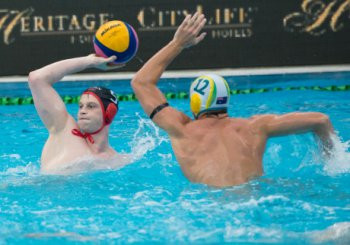 Australia's men will play the United States for the gold medal tomorrow at the Water Polo World League Intercontinental Cup in Auckland after both finished pool play unbeaten.

Australia won their group with a 21-6 thrashing of Kazakhstan and the United States were convincing 14-2 winners against China.

The line-up for tomorrow's bronze medal match in this International Swimming Federation event has still to be decided, although Japan and Kazakhstan are favourites to contest the prize.

Japan beat New Zealand in the final game of day four and play Saudi Arabia tomorrow, while Kazakhstan are still to play New Zealand's second team, who were thrashed 18-3 by Argentina.

All of the top four will qualify for the World League Super Final.

Canada and the United States will meet at the semi-final stage of the women's competition after respective victories over New Zealand's second team and Japan.

Canada progressed thanks to an 18-4 margin.

The US were made to work for their 16-9 win over Japan but will go into their semi-final in better form than they displayed during their opening night’s defeat by Australia.

The Australian women thus extended their unbeaten run, and an Australian double remains on the cards.

Placement matches is due to see the host’s top team meeting Kazakhstan, with the second side now playing Japan.

For the first time ever, both the women's and men's tournaments are being hosted by the same National Federation at the same venue - the Sir Owen G. Glenn National Aquatic Centre.