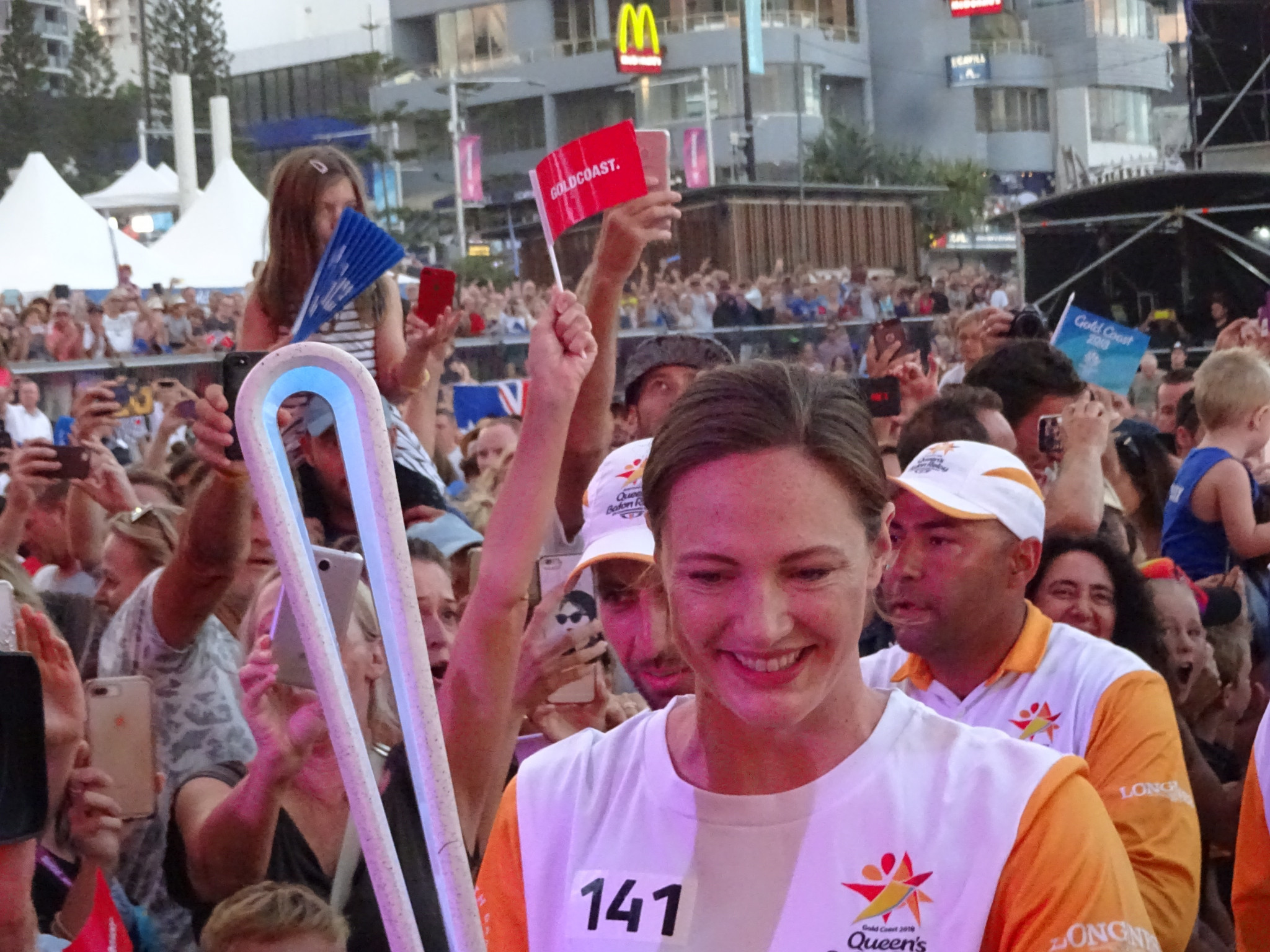 After 99 days on the road in Australia, the Baton containing the Queen's message hit the Gold Coast beach in the Commonwealth Games host city today.

Swimmer Cate Campbell brought the Baton onto the sand at Surfers Paradise, surrounded by hundreds of well-wishers.

The message from The Queen will be read by Prince Charles at tomorrow's Opening Ceremony here and can be seen at the centre of the Baton.

"I definitely was tempted to have a little look but you can't, I know," said Campbell, who is set to defend her 100 metres freestyle title this week.

"We've been in a bit of a bubble in the Village.

"I don't think I've seen as many people in Surfers Paradise since 'schoolies' (a holiday for high school graduates in Australia).

"This is a once in a lifetime opportunity.

"I cannot wait to represent everyone, I am hoping for a couple of renditions of Waltzing Matilda.

"The rest of the world has come to our turf, let's show them what we can do."

Campbell also led the crowd in a chorus of "Aussie Aussie Aussie", a chant originally used by Cornish miners but adopted by Australian cheerleaders.

Swim coach Laurie Lawrence, another Batonbearer, has been a familiar figure encouraging the crowds poolside at Olympic and Commonwealth Games in recent years.

Among his protégés was Tracey Wickham who won freestyle gold in both the 400m and 800m at the 1982 Commonwealth Games in Brisbane.

"It's mind boggling to see what young people and old people do," he said.

"On the bus with the volunteers coming out here you heard so many stories about why these people got here, why they were nominated.

"Truly Australia is a great country and it's in great shape when you have people like this that young kids can look up to."

Lawrence also carried the Sydney 2000 Olympic flame in Townsville near the swimming pool.

"I was there as a kid watching Olympic swimmers train in the pool," he said.

"That's where I got my love of swimming."

He will be watching the Gold Coast 2018 Games on television but promotes water safety for youngsters with the help of his grandchildren, Evie and Harper Reid.

"I just want to see the drowning statistics go down for the under-fives."

The Baton had begun the penultimate day of its journey with a descent at dawn from a Lifelight medical helicopter at Point Danger in Captain Cook Memorial Park.

As spectacular arrivals go that would be hard to top, but teenager Piper Harrison matched it by surfing onto the beach at Burleigh Heads to receive the Baton shortly before lunch.

Shortly afterwards, it was the turn of skateboarder Jack Fardell.

This was a day for Australian swimming stars to carry the Baton.

Her leg was very different to her turn with the Olympic flame back in 2000, when she appeared at the very top of Sydney Opera House.

Emily Seebohm can add the title Batonbearer to her five Commonwealth Games gold medals after taking it to Elephant Point.

After the overnight stop, the Baton sets off from Surfers Paradise again tomorrow to complete a journey of 388 days from Buckingham Palace in London, the longest in Commonwealth Games history.