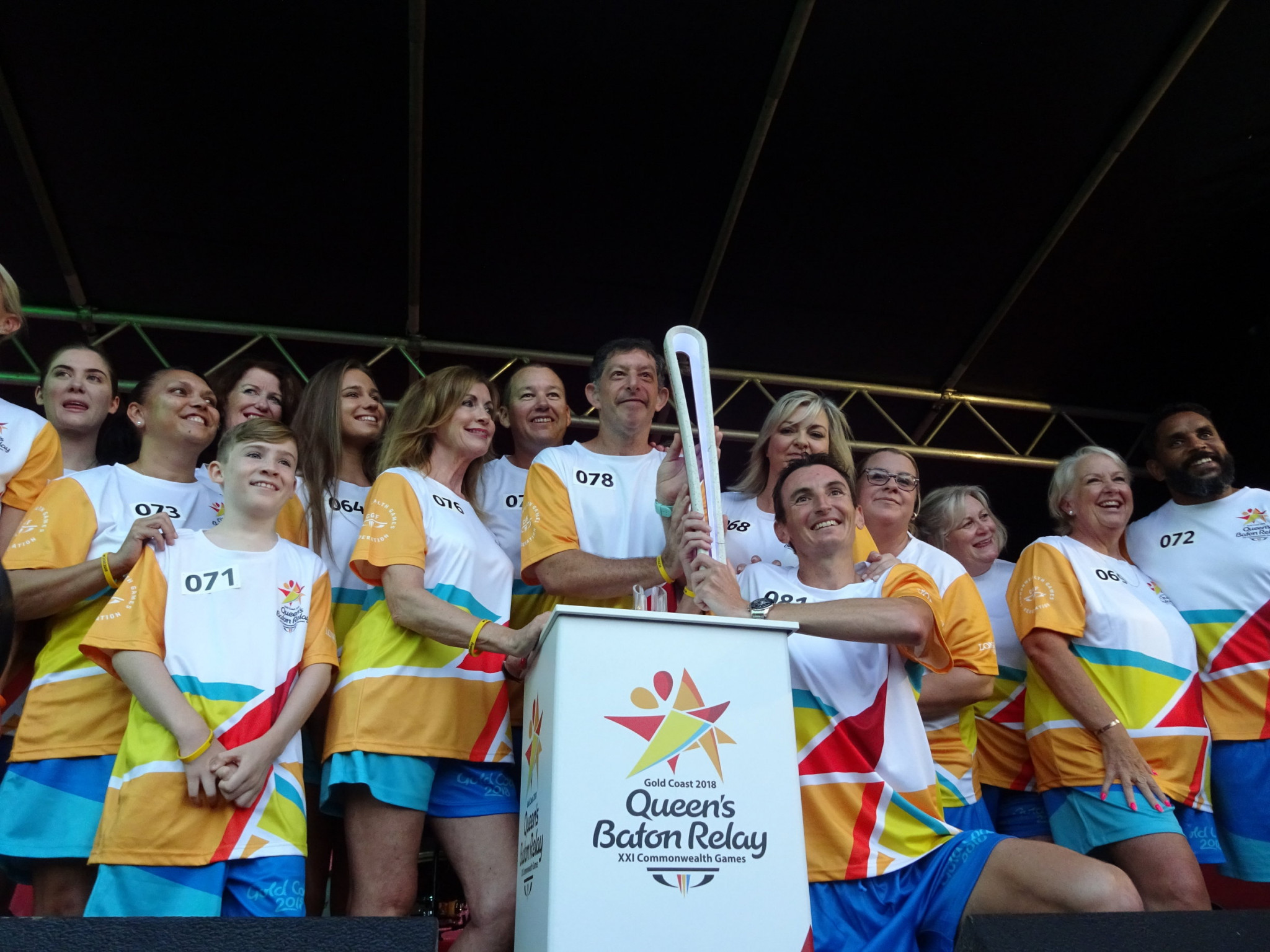 More than a year since the longest Queen's Baton Relay began its journey in London, it is at last spending its first night on the Gold Coast.

It has been carried by Australian champions past and present and those who dream of following their example over the next fortnight.

"It is amazing for it to finally be on the Gold Coast," swimmer Brooke Hanson, who first competed in the 1994 Commonwealth Games in Victoria and won silver medals at Manchester 2002 and Mebourne 2006, said.

"Each one of us that carried it had a fantastic time.

"To hold that baton 24 years later, I made sure I made the most of it.

"To win medals at the Commonwealth Games is very special but to be a Baton bearer is a moment I will never forget.'"

Commonwealth marathon champion Michael Shelley is ready to defend his title after bringing the Baton into Helensvale on the outskirts of the city.

"It had that sort of feeling that it was like running a marathon when the crowds come onto the course," Shelley, winner of a silver medal at Delhi 2010 before striking gold in Glasgow four years ago, said.

"The crowd just hype it up when you’re coming along - it's fantastic and very special.

"I was going to walk to really enjoy it but then I got caught up in the moment of the crowds excitement.

"I had a nice little jog and it was good."

Australia’s Rob de Castella won gold the last time the Commonwealth Games were held on Queensland soil, at Brisbane in 1982, but the 2018 race will represent a new experience for Shelley.

"I have never run a marathon at home so hopefully when the crowds come out I’ll get that little bit of a boost," he said.

"I’ve trained the hardest I can and we’ll see what happens on the day.

"It is two weeks away now.

"Obviously there’s a bit more pressure that you put on yourself being a home Games.

"I have got two medals.

"Each race is a new race so you’ve got to go out and do the best you can on that occasion.

"When the day comes the excitement will build a bit more.

"I lived here for 32 of my 34 years, my schooling was on the Gold Coast so it is going to be quite special."

Although the late Ron Clarke enjoyed an illustrious career as one of history's greatest long distance runners and broke many world records, he was destined never to win Olympic or Commonwealth gold medal.

His son Nicolas ran with the baton in honour of his father, who was Mayor of the Gold Coast when the city won its bid seven years ago to host these Commonwealth Games.

"I was too little to have watched him run but I have seen heaps on video," he said.

"It was very special to run for him.

"He would always go back to his training and try and look at what more he could do."

The young family of Australian bowls player Brett Wilkie lined the route to see him receive the Baton.

His run was a brief respite from training.

"I play just down the road at Helensvale," Wilkie said.

"I’ve been there for 16 years so its great to do it in my home town.

"I’ve been fortunate enough to have been at the last two Opening Ceremonies [at Delhi 2010 and Glasgow 2014] but this one is going to take the cake in front of a home crowd so I am looking forward to being a part of it."

The Relay is due to continue tomorrow when the Baton will be carried by all-time swimming great Dawn Fraser.

She won four Commonwealth Games gold medals in Australian water at the 1962 Games in Perth.