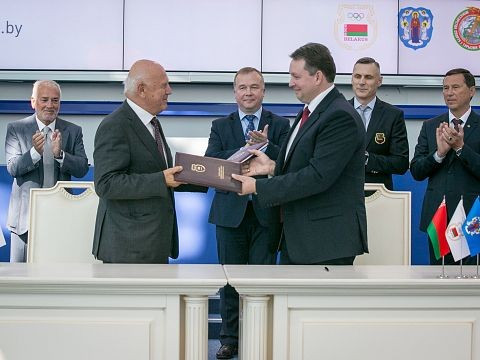 Kocijančič led a high-profile EOC delegation to the official signature ceremony in the Belarusian capital, where the second edition of the Games is set to be held.

Kocijančič and Pagnozzi signed the contract on behalf of the EOC in the Hall of Fame at the Belarus National Olympic Committee (NOC) headquarters.

"I am certain that the Minsk 2019 European Games will be another example of their outstanding ability as a host nation, where we will see a highly sustainable and spectacular event.

"I would like to thank Mayor Shorats for his warm hospitality and very much look forward to working with him, Mr Astashevich, Mr Shamko, Mr Katulin and the rest of the hard-working team in Belarus in the months to come.

"This is a very important milestone, but we must continue to work hard to ensure we deliver the exceptional product we believe the European Games can be."

The EOC claims Minsk 2019 is set to meet Olympic Agenda 2020 criteria through the use of only "high-quality existing facilities", adding that this will "make it as cost effective and sustainable as possible".

"It is vital to the EOC that the Games reflect the recommendations laid out in Agenda 2020 and we believe the 2019 Games in Minsk will provide an excellent blueprint for years to come," Kocijančič said.

The EOC delegation was welcomed to Minsk by Shorats, who in his address promised to deliver a top-class second edition of the European Games, which is fully compliant with Agenda 2020.

The Minsk 2019 Games, which follow the inaugural edition in Azerbaijan’s capital Baku in 2015, is expected to attract 4,000 of Europe’s best athletes.

Preparations for the event will be monitored by a specially-appointed EOC Coordination Commission, which will be led by EOC Executive Committee member and Hellenic Olympic Committee President Spyros Capralos, as was the case for Baku 2015.

The Commission also includes representatives from the NOCs of Europe, the European Federations involved, and experts in various areas such as sport, IT, broadcasting, transport, anti-doping and NOC services.

It is scheduled to undertake a first site visit to Minsk on September 21 and 22.

Last month, Belarus Prime Minister Andrei Kobyakov promised the Government will not overspend on their budget for Minsk 2019.

Belarus plans to spend only $40 million (£31 million/€34 million) on organising the event that is due to feature 16 sports, 11 of which will be qualifying events for the 2020 Olympic Games in Tokyo.