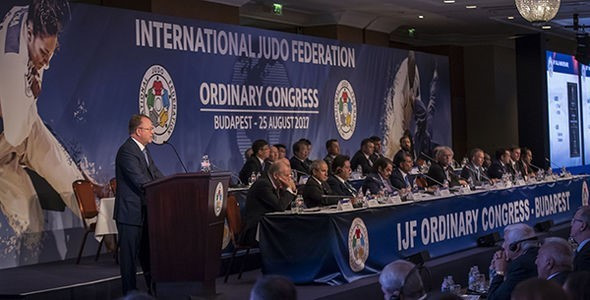 He was the only candidate and was re-elected by acclamation at the IJF Ordinary Congress taking place on the eve of the Suzuki 2017 World Judo Championships, due to start in the Hungarian capital on Monday (July 28).

"It is a great honour for me to serve judo together with our team for the next four years and to promote judo's values to the world," Vizer told delegates following his re-election.

"I hope I can offer to you support and together we can develop judo for the next generation.

"I wish you all a successful World Championships and a wonderful stay in Budapest."

The Romanian had first been elected as President of the IJF in 2007 when he replaced South Korea's Yong Sung Park.

He will be the IJF development manager.

Other notable names re-elected to the Executive included Russian oligarch Arkady Rotenberg, a close friend of President Vladimir Putin, the Honorary President of the IJF, as the development manager.

Also on the 15-strong Executive Committee is Japan's Haruki Uemura, winner of the Olympic gold medal in the open class at Montreal 1976, who was elected as world promotions director.

It contributed to a healthy overall balance sheet, including $31 million (£24 million/€26 million) in cash reserves.

Under Vizer, the IJF have also introduced a series of rule changes to make the sport more appealing to a wider audience.

Since his last election as President at the IJF Congress in Rio de Janeiro in 2013, Vizer had a brief but controversial reign as head of SportAccord, the umbrella group for Olympic and non-Olympic sports now re-named the Global Association Of International Sport Federations.

Vizer resigned as President of SportAccord in 2015 after a controversial speech during which he criticised International Olympic Committee (IOC) President Thomas Bach.

Vizer and Bach have since repaired their relationship and the head of the IOC is due to come here for the closing stages of the World Championships.

Among the new initiatives that Vizer announced today was a new collaboration with American broadcaster CNN who will air a monthly feature on judo.

"We are all very excited at CNN to start this new and vibrant partnership with the International Judo Federation," she told the audience.

"There are a great deal of themes we look forward to exploring and already you can see the launch of the microsite, digital and online coverage as we start this new and meaningful collaboration with the International Judo Federation."