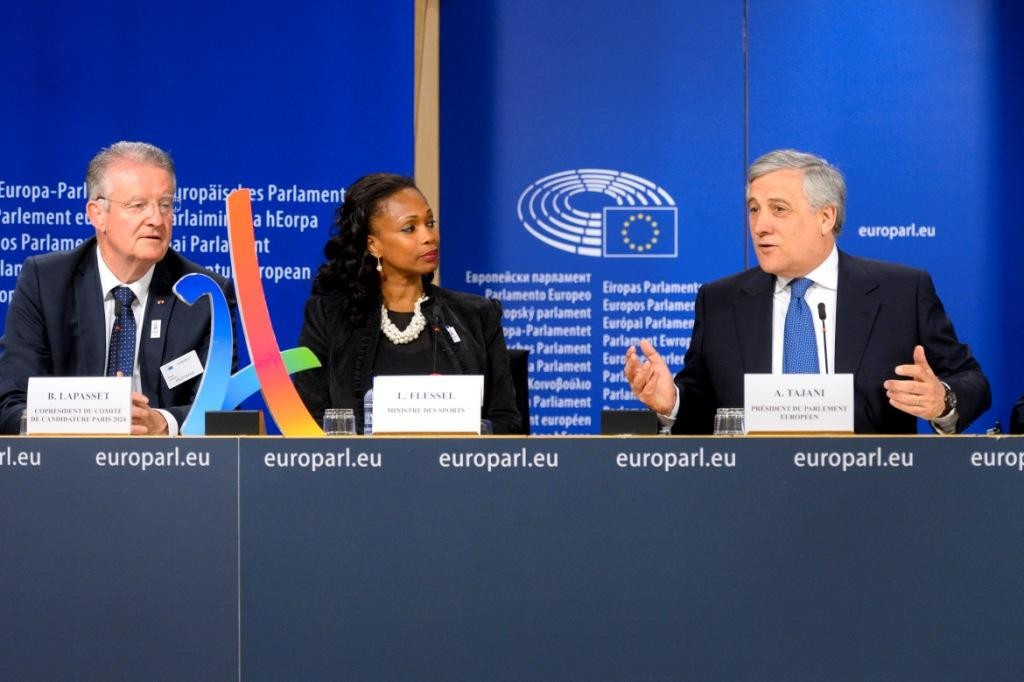 The Paris bid for the 2024 Olympic and Paralympic Games has been backed by European Parliament officials.

A delegation from the French capital, led by Paris 2024 co-chairman Bernard Lapasset and including new French Sports Minister Laura Flessel, shared the bid project with the Parliament's Sport Intergroup in Brussels today.

Antonio Tajani, President of the European Parliament, announced his support of the bid following the session in the Belgian capital.

Marc Tarabella and Santiago Fisas, the co-Presidents of the Sport Intergroup, also confirmed their backing.

The European Parliament is the legislative arm of the European Union, of which France is a key member.

An official vote supporting the bid was not made.

Three European rivals to Paris have already dropped out of the 2024 race - Budapest, Hamburg and Rome - to leave American city Los Angeles as the sole rival to the French campaign.

"We are very pleased to have been able to present our project to the Ministers of the European Parliament and warmly welcome the support of the Parliament, through its President Antonio Tajani," Lapasset, who co-chairs the bid with triple Olympic canoeing champion Tony Estanguet, said.

Lapasset added: "Paris 2024 is a project to be shared in France, Europe and the world and the support of the European Parliament further demonstrates strong unity around our candidature."

The Sport Intergroup brings together 92 members from 21 countries.

Flessel was named as Sports Minister last month, after being appointed to the Government of Prime Minister Edouard Philippe.

The two-time Olympic fencing champion presented the bid to other Sports Ministers from across Europe on May 23.

"The impact of Paris 2024 extends far beyond France," said Flessel.

"I am proud of the enthusiasm that it promotes in our European neighbours, as was seen at the meeting of the European Union Council of Sports Ministers and at the European Parliament today.

"This mobilisation shows Paris 2024 is a unifying project with values that unite us as Europeans."

The International Olympic Committee (IOC) is due to elect a host for 2024 at its Session in Lima on September 13.

It is widely understood, however, that IOC President Thomas Bach wants to also award the 2028 edition - with one Games going to Paris and one to Los Angeles.

Both cities have stressed that their focus is only on the earlier Games.