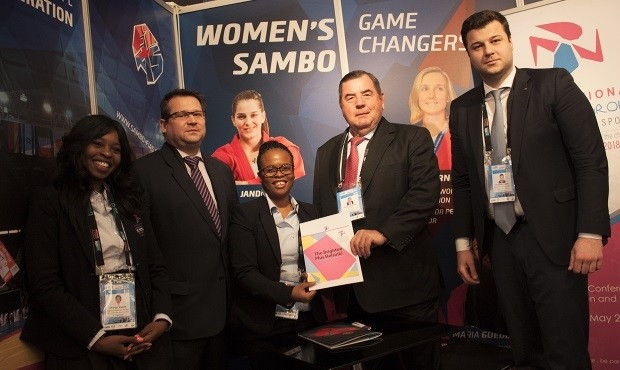 Based in Botswana's capital Gaborone, the IWG deals with gender equality and women's presence in sport at all levels.

It creates initiatives aimed at promoting physical activity, offering men and women equal opportunities in sport and enlisting men as allies in the fight for gender equality.

FIAS' Women's Commission has been working closely with sambo athletes and administrators to identify what could be done to enhance the female side of the sport.

Athanase was also in talks with the organisation for FIAS to join other sport entities as a signatory of the Declaration.

"The most important highlight of this partnership for FIAS is to clearly step forward in work towards gender equality and equal participation of women and girls in sambo at all levels and roles; as athletes, coaches, referees and executive officials," a FIAS statement reads.

FIAS has witnessed an ever-growing increase in women’s participation at sambo events and has launched a gender equality campaign, entitled "Share Your Story", where female sambists are encouraged to share sporting challenges on their social media pages.

In January, a video campaign was launched addressing gender equity in the sport.

The video shows examples of women that play important roles in the development of sambo in different parts of the world.

It can be accessed by clicking here.