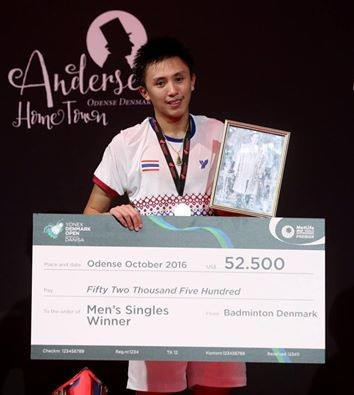 He emotionally dedicated his victory to the recently deceased royal afterwards.

King Bhumibol had been the world's longest reigning monarch when he died aged 88 after 70 years on the throne earlier this month.

There was also success for Denmark on finals day, as the hosts secured a first victory in the annual event since 2011.

It was Joachim Fischer Nielsen and Christinna Pedersen, the same pair who triumphed five years ago, who secured a spot on the winners podium in the mixed doubles.

Akane Yamaguchi secured a second gold for Japan in the women's singles final courtesy of a 19-21, 21-14, 21-12 win over Tai Tzu-ying of Chinese Taipei.