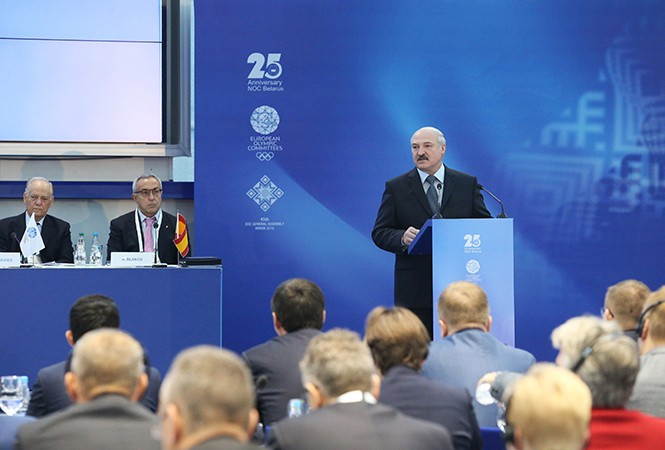 A much more modest European Games is planned when they are held in Minsk in 2019, featuring less extravagant venues and possibly fewer sports than were in Baku last year, it was revealed here today.

Janez Kocijančič, the acting President of the European Olympic Committees (EOC), admitted that they wanted to get back to the spirit of when the original concept was conceived.

Azerbaijan invested at least $1.2 billion (£998 million/€1.1 billion) in staging last year's inaugural event, although the figure was widely thought to be much higher as the new Olympic Stadium, host of the Opening and Closing Ceremonies, cost $600 million (£499 million/€550 million) alone.

"The first idea was a modest Games with not much investment but Azerbaijan was an exception," Kocijančič told insidethegames.

"In the next edition we will adapt to use existing infrastructure with little investment."

The decision to award Minsk the event at the 45th edition of the EOC General Assembly yesterday has not proved popular with several National Olympic Committees.

Denmark and Norway voted against it and five others, including Britain, abstained.

Morten Mølholm Hansen, chief executive of the National Olympic Committee and Sports Confederation of Denmark, was the most vocal critic.

"We know neither the conditions, the economy or the programme.

"The process has failed to meet generally accepted transparency and good governance."

"The NIF believes that the case was not sufficiently studied, neither in terms of concept, implementation or economics," he said.

Another factor, however, may have been the regime of Belarus President Alexander Lukashenko, who addressed the delegates yesterday to confirm Minsk would step in to host the event.

Lukashenko has been criticised for human rights violations and persecution of non-governmental organisations, independent journalists, national minorities and opposition politicians.

Kocijančič defended the decision to award Minsk the Games, however.

"The process was very transparent," he told insidethegames.

"We were looking for an organiser and none of these two countries [Denmark and Norway] were interested in organising them.

"Minsk have organised big events in the past and shown they have the experience."

The process of which sports will feature on the programme at Minsk 2019 will begin to be decided at the next EOC Executive Board, due to take place in January.

There were 20 sports at Baku 2015 but there are expected to be less in Minsk.

Doubts remain over the status of athletics and swimming, both of which were of low quality in Baku.

Among the first things that Kocijančič did following the decision to award Minsk the European Games was to call Patrick Hickey to inform him.

The Irishman has temporarily stood down as EOC President following his arrest during the Olympic Games in Rio de Janeiro after allegations he was illegally involved in selling tickets.