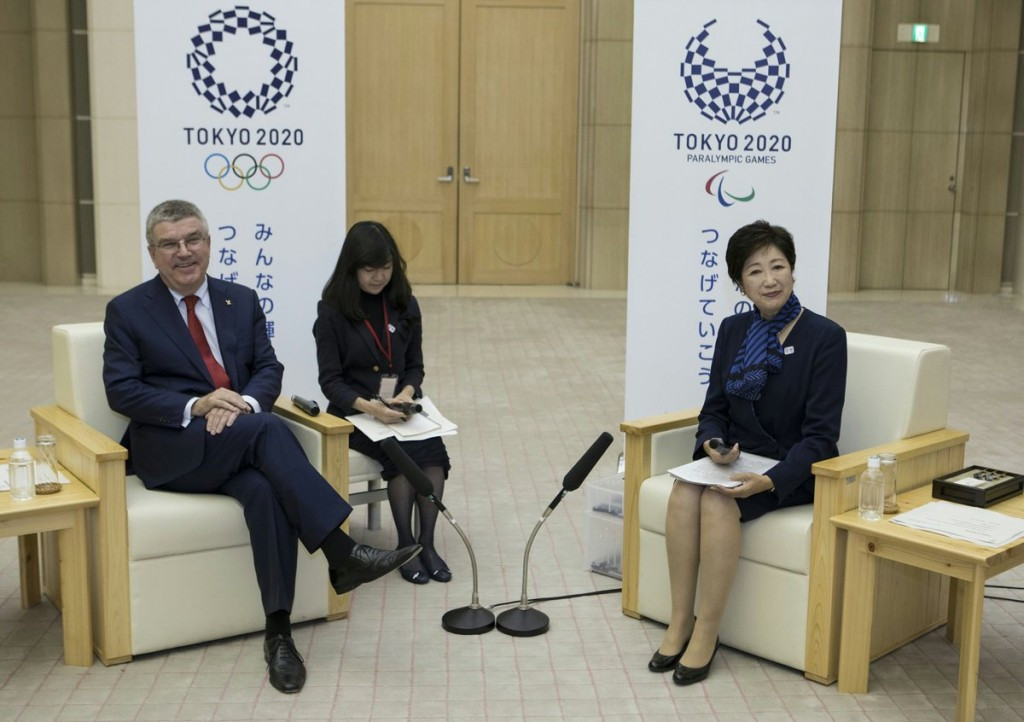 International Olympic Committee (IOC) President Thomas Bach insists he is fully confident the fears over the ballooning budget of Tokyo 2020 will be unfounded and that a group involving the major stakeholders in the Games in the Japanese capital will help to bring about a "significant reduction" in costs.

Bach had a 40-minute meeting with Tokyo Governor Yuriko Koike today, during which it was agreed that a four-way working group, between the IOC, Tokyo 2020 and the Tokyo Metropolitan and Japanese Governments, would be established to look at the sustainability of the event.

It follows a report commissioned by Koike, which suggested a number of changes be made to the current plans for the Games, including moving rowing and canoeing 400 kilometres from the Japanese capital to the Naganuma rowing course in Tome.

It was claimed that the budget could spiral to ¥3 trillion (£22 billion/$30 billion/€26 billion), four times its initial value, unless drastic alterations, such as moving venues, are made.

"Having achieved almost $2 billion (£1.6 billion/€1.8 billion) worth of savings and by having the contribution of the IOC of about $1.7 billion (£1.4 billion/€1.5 billion), therefore I am very happy with this meeting today because we agreed to continue in this way of co-operation to make Tokyo 2020 the most sustainable and feasible Games possible," Bach said after he met with Koike.

"The Tokyo Metropolitan Government will finalise its internal study - we will then discuss it with other stakeholders of the Olympic project including the IOC and then I am confident that you will see a significant reduction in the costs compared to what we have seen so far from the press in this interim report."

IOC vice-president John Coates, the chairman of the Tokyo 2020 Coordination Commission, claimed they "had not seen any figures" but that the numbers being reported "seem large to us".

Both rowing and canoeing were originally due to be staged at the Sea Forest Waterway in Tokyo but abandoning those plans was among the alterations proposed in the report.

The respective Federations of rowing and canoeing, the sports most affected by the potential changes, have voiced their considerable concerns at holding events in Naganuma.

The ICF also swiftly rejected suggestions from the Japanese Canoe Federation that the Toda Rowing Course in neighbouring Saitama Prefecture, which played host to the sports at Tokyo 1964, could be used as an alternative.

Reports then emerged earlier today that the IOC were considering a facility in Chungju in South Korea should an agreement not be reached over where to stage the sports at the Games.

Bach declined to comment on reports, claiming they had only been made aware of the issue by the media.

The ICF, FISA and Tokyo 2020 have all continuously reiterated the Sea Forest venue is the best option for the two sports.

"We see that there are some ideas coming up and there are some proposals and an evaluation going on here in the Tokyo Metropolitan Government and we appreciate this because it makes all the budgeting more transparent and this is what we in the IOC are interested in, to show the real costs and also the benefit of the Olympic Games," Bach added.

"Therefore we are ready to contribute to this evaluation with our experience based on the results of previous Games and based on the reforms we undertook as part of Olympic Agenda 2020.

"I have no concerns at all.

"It is up to the Metropolitan Government to tell us when they are ready to propose the final paper to the four partite commission so it can be discussed and after this discussion we will hopefully have an agreement which is in the interests of everybody.

"I understand it needs more consultation here with the Organising Committee, with the federation and we are waiting for this - the IOC is ready today."