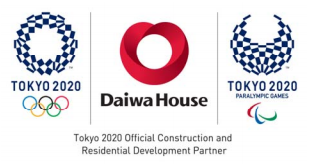 Daiwa House Industry has become the latest official partner of the Tokyo 2020 Olympic and Paralympic Games, it has been announced today.

Japan's largest homebuilder, which specialises in prefabricated houses, has been attributed the category "Construction and Residential Development".

Its addition brings the total number of Tokyo 2020 domestic partners to 40, including 25 official partners.

"Since the company's founding in 1955, Daiwa House Industry has pioneered the industrialisation of residential housing, and has an outstanding record of achievement in construction, real estate and several other fields," said Tokyo 2020 President Yoshirō Mori.

"I am therefore delighted that Daiwa House Industry will be joining us in our efforts to deliver a successful Tokyo 2020 Games."

Daiwa House Industry has been an official partner of the Japanese Olympic Committee since 2009, providing support to various sporting activities.

The company hired leading Japanese speed skater Yuya Oikawa, a 500 metres world silver medallist in 2007, as an employee in September 2010.

It also entered into an affiliation agreement with professional women’s golfer Shiho Oyama in February 2012.

Daiwa House Industry says it will continue to contribute to the enhancement of sports in Japan as a second-tier domestic sponsor of the Tokyo 2020 sponsorship programme, enabling it to provide further support to the Japan Olympic and Paralympic teams.

"We are very honoured to be able to take part in the Tokyo 2020 Olympic and Paralympic Games as a Tokyo 2020 official partner in the category of 'Construction and Residential Development'," said Naotake Ohno, President and chief operating officer of Daiwa House Industry.

"Daiwa House Industry is involved in a broad range of business activities: from construction and related works for single-family houses, rental housing, condominiums and home renovation through to commercial facilities, logistics facilities, and business and corporate facilities.

"In line with our corporate aim of 'Creating Dreams, Building Hearts', we hope to contribute to the realisation of a society in which all people can lead fulfilling lives through our business operations and the active promotion of sports and cultural activities.

"Through various initiatives, we will continue to fully support the success of the Tokyo 2020 Games."

As a second-tier domestic sponsor, Daiwa House Industry will have the rights to use Olympic and Paralympic designations and imagery including emblems, mascots and slogans.

The highest tier of domestic sponsors are Gold Partners, which so far includes the likes of Canon, Asahi, NEC and Fujitsu.

A third tier of official supporters is also in operation.