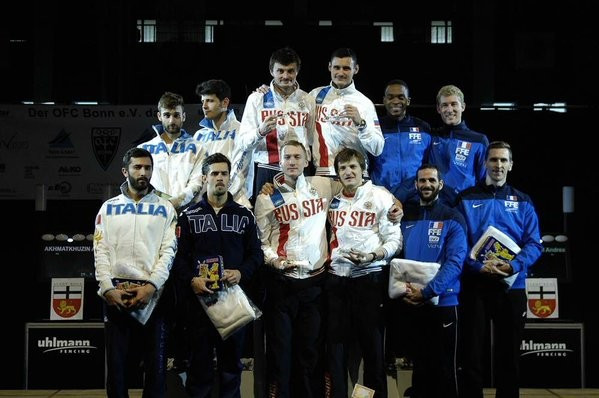 Russia won the men’s team foil competition at the Fencing World Cup in German city Bonn after overcoming Italy in the final.

Having beaten China 45-30 in the semi-finals, Russia edged Italy 45-39 to take the gold medal.

France, who lost 45-31 against Italy in the other semi-final, went on to beat China 45-32 in the third place play-off.

Among them was Great Britain, whose ninth-place finish ensured they are the highest-ranked European nation outside the world's top four and therefore qualify.

They faced a nervous wait after losing by a single hit to Germany, who could have leapfrogged Britain in the rankings if they finished in the top two at the event.

But Germany could only finish seventh after losing to France in the quarter-finals.

"Now the focus turns to Rio where we will focus all our efforts on delivering a medal."

James-Andrew Davis, who won the individual event yesterday added: "It's been a great weekend and we have finally qualified.

"It's been a long year but so pleased to be working with these boys.

"Now looking forward to the preparation for Rio."

The United States, France, Italy and Russia, who make up the top four in the official International Fencing Federation rankings for the men’s team foil, had already accrued enough ranking points to progress to Brazil prior to the event.

China took their place as the top-ranked team from Asia-Oceania, with London 2012 silver medallists Japan missing out.

Having been knocked out by Italy in the quarter-finals, Japan were relying on China to win their semi-final and give them the chance of qualifying as Asia’s second best team.

But with China losing, and thus missing out on an automatic berth among the world’s top four, Japan’s hopes of earning another Olympic team medal in Rio were ended.

Egypt had already sealed the African place at the Olympic Games, while Rio 2016 hosts Brazil qualified on a tiebreaker decision at the expense of Canada.