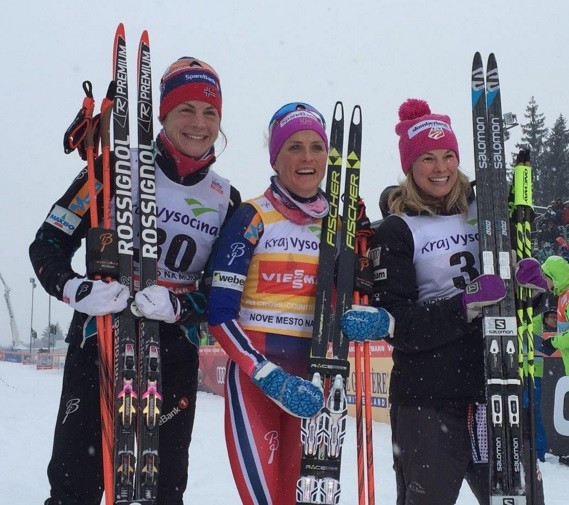 American Jessie Diggins secured her second podium of the season, finishing third as the top three were separated by just 9.3 seconds.

The Norwegian’s success saw her cement her position as the overall World Cup leader on 1484 points, with team-mate Ingvild Flugstad Østberg second on 1,274.

“It feels great to come back to the World Cup with a victory,” Johaug, who opted to take a one-week break following her Tour de Ski triumph, said.

“I have recovered very well from the Tour de Ski.

“I am happy that Astrid is on the podium with me.”

The men’s 15km event also provided excitement for the Czech fans as France continued their recent run of dominant performances thanks to Maurice Manificat, winner of the gold medal in 34:04.9.

Manificat’s victory was his first of the campaign and guided France to their third consecutive podium finish.

“I was focused on this weekend,” he said.

“There are not many 15km free technique in the World Cup calendar.

“I knew Martin was a favourite but I was ready to fight.

“I know that when I am in the best shape I can ski like today.”

Manificat is currently seventh in the overall standings on 560 points, with Sundby the clear leader on 1,502 points.

The event is due to continue tomorrow with the women’s 4x5km relay and the men’s 7.5km relay.