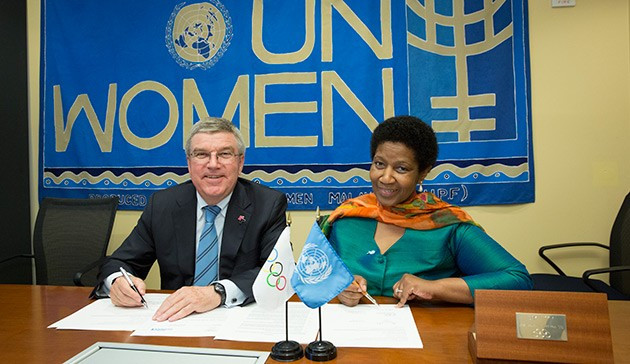 A United Nations Women project titled “One Win Leads to Another” is set to receive the support of the International Olympic Committee (IOC) after they pledged to give $600,000 (£396,000/€533,000) to the programme, based in the State of Rio de Janeiro.

Run by UN Women in partnership with the National Olympic Committee of Brazil, the project aims to target around 2,500 girls from the ages of 12 to 14 with a series of sport programmes, which aims to build their leadership skills and their ability to influence decisions affecting their lives.

As part of the pilot project they will aim to use the National Youth School Games to spread messages of non-discrimination, non-violence and girls’ empowerment.

Following the pilot, which is due to take place across 50 schools, it is hoped the project will be implemented on a national and international level.

The IOC’s backing of the programme sees them continue to enter partnerships with the UN as part of their commitment to supporting gender equality, following their adoption of President Thomas Bach’s Agenda 2020 reforms.

“With the Olympic Games Rio 2016 less than a year away this programme will add to the many Olympic legacies already planned for the city, the region and the country," Bach said.

"Olympic Agenda 2020, our strategic roadmap for the future of the Olympic Movement, has targeted gender equality as a key goal and this project will deliver in a very concrete way working with young women through sport.”

The agreement to support the project was signed during the General Assembly of the UN, in which they adopted the post-2015 Development Agenda last week in New York.

The inclusion of sport within the UN Agenda had been a key aim of the IOC in recent months, while developing closer relations with the UN has also been a priority for Bach after assuming the Presidency in 2013.

Bach himself had also been named as a "HeForShe" by UN Women earlier this year, with the campaign aimed at fighting for gender equality and women’s rights.

The latest strengthening of the partnership between the two organisations stems with the signing of a Memorandum of Understanding in 2012, committing them to promote gender equality and women’s empowerment through sports.