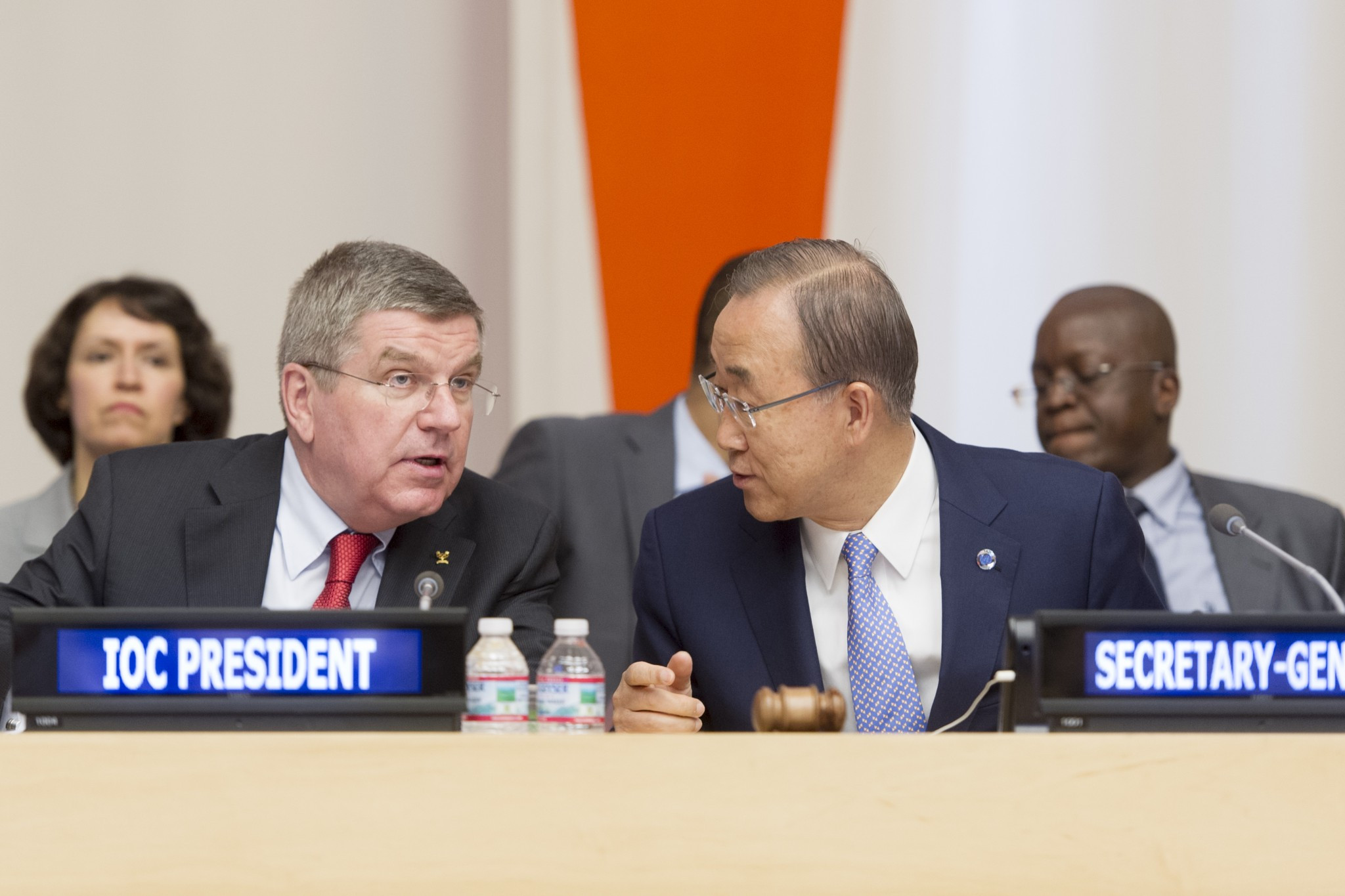 Thomas Bach, President of the International Olympic Committee (IOC), has reiterated his belief in sport’s power to help in the fight against discrimination as part of a speech to mark International Day of Sport for Development and Peace at the United Nations headquarters in New York City.

The German spoke of the IOC’s move to strengthen its commitment to equality when it amended Fundamental Principle 6 of the Olympic Charter to mirror the UN’s Universal Declaration of Human Rights, which came just months after global demonstrations protesting against Russia’s anti-gay law cast a shadow over the Sochi 2014 Winter Games.

It now reads: “The enjoyment of the rights and freedoms set forth in this Olympic Charter shall be secured without discrimination of any kind such as race, colour, sex, sexual orientation, language, religions, political or other opinion, national or social origin, property, birth or other status.”

Bach also said the adoption of Olympic Agenda 2020 will help to “leverage the power of sport as a force for positive change around the world”, while challenging gender norms and negative stereotypes, and promoting gender equality.

“Sport has a unique role in society,” he said.

“Sport is the only area of human existence that has achieved its own universal law.

“The rules of sport are recognised and followed wherever sport is played.

“They are based on a global ethic of fair play, respect for opponents, tolerance and friendship.

“In sport all people are equal.

“Political interference can threaten this universal law of sport by introducing pressures that undermine the core principles of fair play, tolerance and non-discrimination.

“Therefore sport has to be politically neutral, but it is not apolitical.

“Sport is not an isolated island in the sea of society.

“We want to engage with Governments, businesses, the academic community and civil society.

“The IOC maintains an open dialogue with representatives from the LGBT community, Human Rights Watch, the Committee to Protect Journalists and the International Trade Union Confederation and other NGOs that advocate for social justice.

“The climax of our engagement with organisations outside the world of sport is our partnership with the United Nations.”

Bach went on to speak of how sport can help to advance the UN’s Sustainable Development Goals, particularly number three, which calls for the attainment of healthy lifestyles, and four, which promotes inclusive quality education.

Equally, he highlighted the IOC’s work with Syrian refugees in Jordan and those affected by crime and violence in Rio de Janeiro’s favelas.

Also speaking at the special event, will celebrated sport’s role as a tool for social change and peace, was International Paralympic Committee (IPC) President Sir Philip Craven, who reinforced the position of the Paralympic Games as an event for driving social inclusion.

The Briton used the examples of Para-athletes Charles Okwanga of Uganda, Australian Donna Ritchie and China’s Tao Zheng to demonstrate how their involvement in sport has transformed their lives and highlighted that some 20 million people in Great Britain, one third of the population, changed their view of people with an impairment as a result of the London 2012 Paralympics.

“In my opinion, no other sporting event in the world can deliver such seismic shifts in attitudes or drive social inclusion as well as the Paralympic Games,” said Sir Philip.

“For me sport is the antithesis of war; it improves self-discipline, respect and tolerance and leads to a greater understanding of why in life you must play by the rules.

“Where else can you pit two fierce rivals head-to-head in peaceful conflict other than in sport?

“Apart from the obvious health benefits, sport helps the individual to help themselves, and enables them to achieve personal freedom."

Sir Philip added: “It awakens their hearts, minds and souls so that they can discover with a passion their own talent.

“Looking at the advantages sport can bring, it makes sense to get young people active and involved as early as possible.

“The best way to achieve this is through school.

“In my view very few academic subjects can teach such a wide range of skills as sport.

“Together we need to embark on a long-term programme of education where sport and activity play a key role in encouraging people to maximise their development of what they possess, not worrying about what they don’t.”

American Paralympic wheelchair racing gold medallist Cheri Blauwet, chair of the IPC Medical Committee, was also a speaker in New York City today where emphasised the legacy of the Paralympic Movement in empowering individuals through inclusion and societal change.