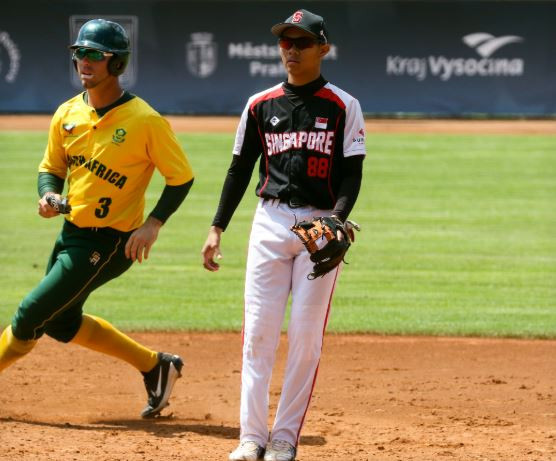 The victory was Singapore's fourth at any World Championship, in their third participation.

At Hippos Arena, South Africa raced into the lead in the first innings with a two-run homer by Javier Frost to centre field.

Singapore grabbed their first run of the tournament in the fourth with a run batted in single from Ivan Ng Ee Han, but South Africa restored a two-run lead with a solo homer from Mandla Matswenyane.

It was left to Tai Jin Tan to complete the fightback win with a walk-off sacrifice fly.

Venezuela remained unbeaten with a 9-1 drubbing of the Netherlands, while Australia bounced back from a 4-1 defeat to Canada by edging out Denmark 5-3.

Canada cruised to a 4-1 victory against the United States to keep pace with Venezuela at the top of the group.

In Group A, Cuba claimed a second consecutive win with a 7-2 triumph against Mexico at Svoboda Park in Prague.

They scored on two wild pitches from Mexico's Jonathan Muñoz to extend their lead.

Mexico got on the scoreboard in the top of the fourth with a run batted in single from Alan Salgado, but Cuba added three more runs in the bottom of the fifth as they climbed to third behind Japan.

Japan earned a fourth straight victory with a crushing 10-0 success against the Philippines, while Argentina claimed a 6-3 win against their Czech hosts.

World champions New Zealand bounced back from yesterday's 5-4 loss to Mexico with a 7-0 win against Botswana.