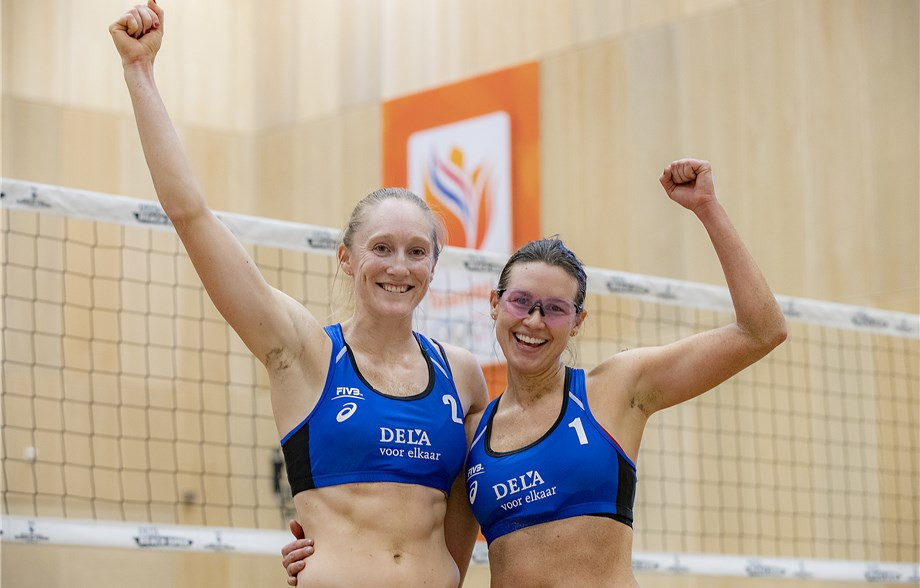 Emily Day and Betsy Flint of the United States, who first teamed up in May, have continued their good form by qualifying for the main draw of the International Volleyball Federation Beach World Tour event in The Hague.

Day and Flint defeated Lithuania's Urte Andriukaityte and Vytene Vitkauskaite 21-16, 13-21, 15-9 in the qualifying round of the four-star event at the Sportcampus Zuiderpark.

The pair have reached the quarter-finals of three tournaments, as well as achieving their first World Tour gold at the three-star Haiyang tournament in China.

"We're really coming together," Flint said after their win in the Dutch city.

"It was a bit rough in the beginning and we didn't get the results we wanted, but we know it isn't always about the results and we tried to stick to the process.

"It's one tournament at a time, and we know that in the US system there's a lot of top teams so we're going to battle through a lot of qualifiers to be at the top, but for now it is just small goals."

Emma Piersma and Puk Stubbe of The Netherlands delighted the home crowd by first defeating Lézana Placette and Alexia Richard of France 21-17, 18-21, 16-14 and then getting past Austria's Franziska Friedl and Eva Pfeffer 21-15, 22-20 to progress into the first round.

"We won this [second] match thanks to our fighting spirit and a lot of courage," Piersma said.

"We definitely felt the tension, but we were extremely relieved to win the match as our aim was to reach the main draw."

Their compatriots Olivier Barthelemy and Arnaud Loiseau then beat Daniel Thomsen and Kristoffer Abell of Denmark 21-14, 21-15.

The qualification matches in the men's competition will continue tomorrow, before the main draw of the women's event begins.