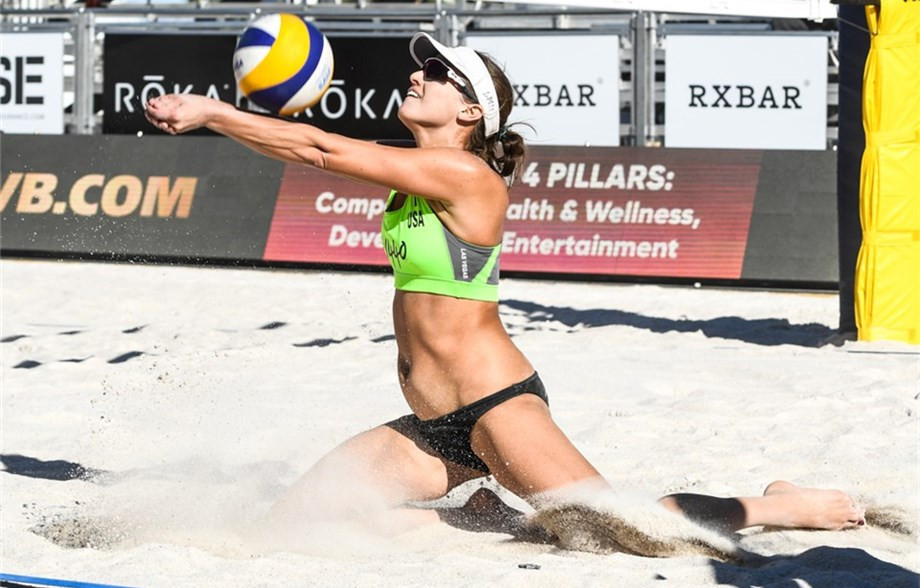 Two American teams have made it through to the International Volleyball Federation (FIVB) Beach Volleyball World Tour men’s quarter-finals in Las Vegas.

Tri Bourne and Trevor Crabb made the quarter-finals after a three set match against Germany’s Phillipp Bergmann and Yannick Harms, 19-21, 23-21, 15-9.

Compatriots Jake Gibb and Taylor Crabb are also through to the final eight of the four-star event, after another three set battle.

Joining the two teams from the United States, is Russia’s Oleg Stoyanovskiy and Viacheslav Krasilnikov.

The Russian pair beat Brazilians Saymon Barbosa and Guto Carvalhaes, 21-13, 17-21, 15-13 for their place in the quarter-finals.

Poland’s Grzegorz Fijalek and Michal Bryl are also quarter-finalists as they won all of their first three matches without dropping any sets.

The Poland pair’s final victory to see them progress was against Italy’s Marco Caminati and Enrico Rossi, 21-13, 21-11.

They progressed to the quarter-finals in straight sets over Qatar’s Cherif Samba and Ahmed Tijan, 21-18, 21-17.

Spain’s Pablo Herrera and Adrian Gavira overcame Brazil’s Pedro Solberg and Bruno Schmidt in a three set match in their round of 16 to advance.

The final two quarter final spots will be filled by Brazil’s Ricardo Santos and Alvaro Filho and Norway’s Anders Mol and Christian Sørum.

The Brazilians beat the Dutch pair of Alexander Brouwer and Robert Meeuwsen, whilst the Norwegians prevailed against Latvia’s Martins Plavins and Edgars Tocs.

In the women’s draw, there was also success for the hosts.

Only two teams have qualified so far for the quarter-finals, one of which is the American pair, Emily Day and Betsi Flint.

Day and Flint had to eliminate two teams also from the US to confirm their place in the last eight.

Brazil's Rebecca Cavalcanti and Ana Patricia Silva also qualified for the quarter-finals by the end of the second day.

The Brazilian pair had to knock out their own compatriots as they topped Pool H with a 21-19, 25-23 victory against Maria Clara Salgado and Elize Maria Secomandi.