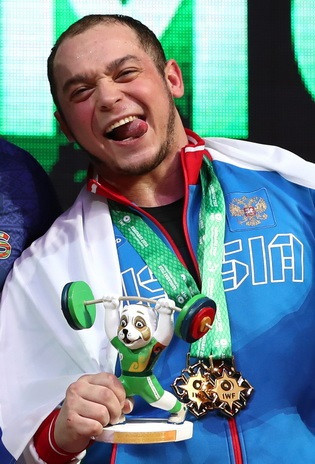 Artem Okulov secured Russia their first two medals of the 2018 International Weightlifting Federation (IWF) World Championships here in Turkmenistan’s capital after coming out on top in the men’s 89 kilograms clean and jerk and total events today.

Russia was among nine nations - along with China, Kazakhstan, Ukraine, Armenia, Azerbaijan, Belarus, Moldova and Turkey - banned last year by the IWF for having multiple positives in the re-testing of doping samples from the 2008 and 2012 Olympic Games in Beijing and London.

The country, which had already been suspended from Rio 2016, missed last year's IWF World Championships in Anaheim.

They had gone five days without picking up a single medal at this year’s event but now have two golds after Okulov, the 85kg world champion in 2015, won the clean and jerk with 206kg for an unrivalled total of 372kg.

He had earlier finished with an eighth-best 166kg in the snatch, won by Chile’s Arley Mendez Perez, the 85kg world champion in 2017, with 169kg.

The overall runner-up was Belarus’ Pavel Khadasevich with 371kg.

His total was matched by Georgia’s Revaz Davitadze but Khadasevich took the silver medal by virtue of the fact that he registered it first.

The Belarusian also finished second in the snatch with 169kg, while Colombia’s Jhor Esneider Moreno Torres came third with 168kg.

Armenia’s Hakob Mkrtchyan was Okulov’s nearest challenger in the clean and jerk, finishing one kilogram behind with 205kg.

Two failed attempts at 213kg, the last two of the whole competition, cost him gold medals in both the clean and jerk and total.

A good lift would have seen him move onto 373kg overall, bettering Okulov by a kilogram.

Instead, he finished seventh with a total of 365kg.

Davitadze finished the event with junior world standards in the snatch and total having managed 168kg and 371kg respectively.

His final clean and jerk lift at 203kg was also a junior world standard before Vallenilla Sanchez bettered it with his 204kg.

Earlier, China’s Zhang Wangli set world standards in the clean and jerk and total on her way to claiming all three gold medals in the women’s 71kg category.

Having won the snatch with 152kg, the 22-year-old begun the clean and jerk with a lift of 140kg that proved to be enough in itself for overall victory.

"I got everything I wanted."

Her best lift in the snatch, 111kg, and her two lifts in the clean and jerk, 136kg and 141kg, were also junior world standards.

Ahmed came third in the snatch, a kilogram short of Kazakh silver medallist Nadezda Likhacheva’s 112kg, and second in the clean and jerk, finishing ahead of 2017 world bronze medallist Martha Ann Rogers who secured the United States’ first medal of these World Championships with 133kg.

Rounding out the overall podium was Likhacheva with 242kg.

Action in Ashgabat is due to continue tomorrow where medals be will be awarded in the men's 96kg and women's 76kg categories.