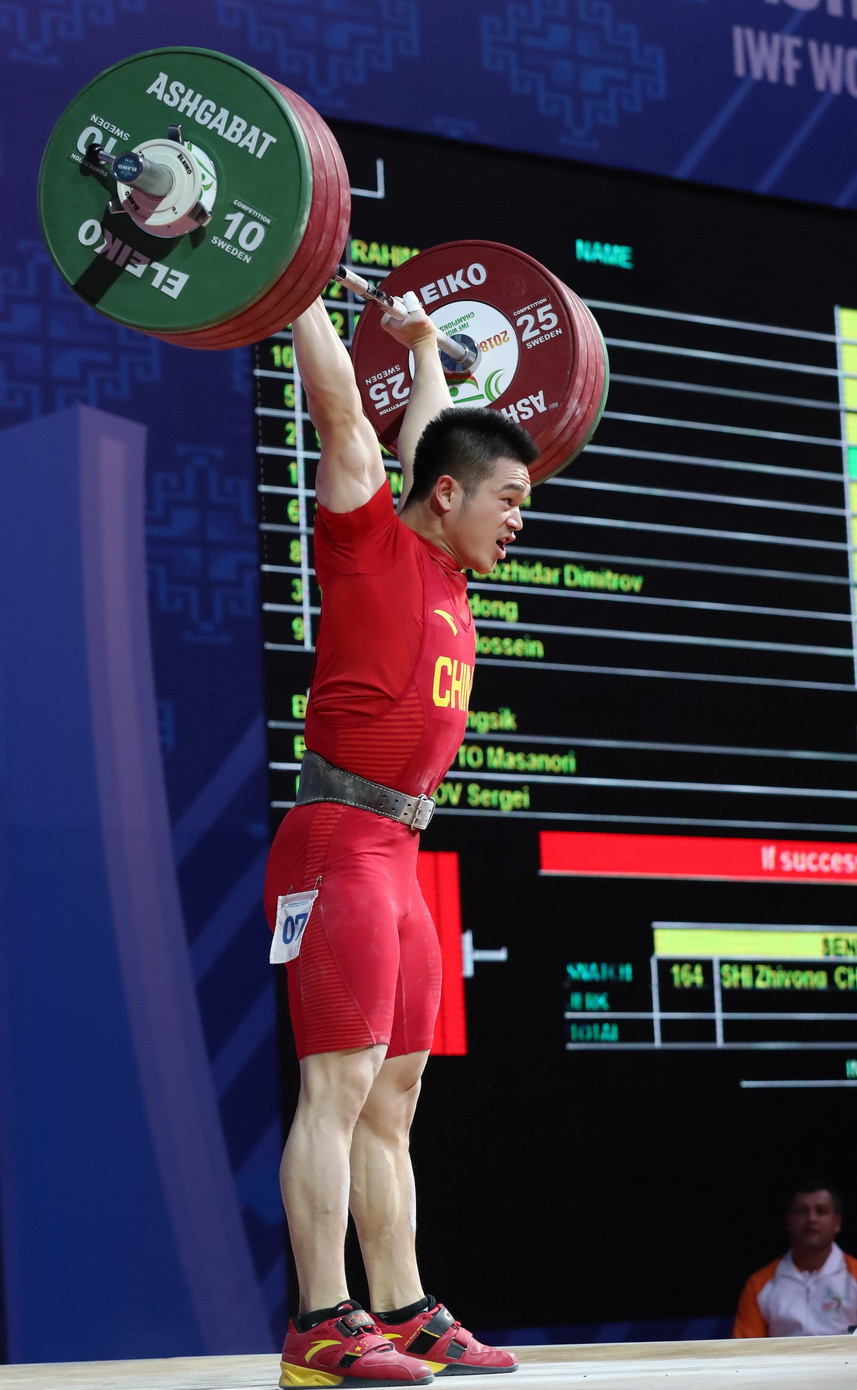 China's Shi Zhiyong set world standards in the snatch, clean and jerk and total as he cruised to success in the men's 73 kilograms category here at the 2018 International Weightlifting Federation (IWF) World Championships in Turkmenistan's capital.

Having twice broke the world standard in the snatch with lifts of 161kg and 164kg, the Rio 2016 Olympic gold medallist went onto seal overall victory with a world standard-breaking clean and jerk of 196kg.

It gave him a world standard-breaking total of 360kg, improving on the 352kg he had registered moments earlier after his first successful clean and jerk lift at 188kg.

Such was his dominance that Shi opted against carrying out his final lift.

Surprisingly, the overall silver medallist was Group B competitor Won Jeongsik of South Korea after he finished with a total of 348kg earlier in the day.

A best clean and jerk lift of 195kg, the world standard until Shi eclipsed it, ensured him a silver medal in that event as well.

Completing the overall podium was Belarus' Vadzim Likharad with 343kg.

He was the silver medallist in the snatch with 156kg and fifth-place finisher in the clean and jerk with 187kg.

China's Feng Lyudong took the snatch bronze medal with 155kg, while Kazakhstan's Nijat Rahimov came third in the clean and jerk with 190kg.

Another notable performance came from the United States' Clarence Cummings Jr, who twice broke world standards in both the clean and jerk and total on his way to a 10th-place finish overall.

There was also overall success for China today in the men’s 67kg category as Chen Lijun, the 2013 and 2015 world champion at 62kg, triumphed with a world standard-breaking total of 332kg.

It came after he won the clean and jerk with 182kg and finished second behind compatriot Huang Minhao in the snatch with 150kg.

Chen attempted a final clean and jerk lift at 185kg, which would have bettered the world standard of 184kg, but it proved to be too much for him.

Huang won the snatch with 152kg, but he had to settle for the silver medal overall with 323kg after ending up ninth in the clean and jerk with 171kg.

Rounding out the overall podium with 322kg was Venezuela’s Julio Ruben Moyara Pernia, who also won the snatch bronze medal with 147kg.

Uzbekistan’s Doston Yokubov landed the clean and jerk silver medal with 180kg and was followed in the standings by Colombia’s Oscar Albeiro Figueroa Mosquera with 178kg.

The one other category in which medals were won today was the women’s 59kg as Chinese Taipei’s Kuo Hsing-Chun prevailed overall with a world standard-breaking total of 237kg.

Kuo, a two-time world champion and the Rio 2016 Olympic bronze medallist at 58kg, lifted 100kg, 103kg and a world standard-breaking 105kg in the snatch.

She then went onto finish second in the clean and jerk with what was initially a world-standard breaking 132kg before China’s Chen Guiming bettered it with 133kg to secure the gold medal.

Chen then attempted a final clean and jerk lift of 140kg, which would have given her overall victory, but she failed.

"I thought I could set a clean and jerk record, but I didn’t expect the other two," Kuo said.

"It kind of just happened.

Chen finished with a total of 231kg to take the overall silver medal, while Latvia’s Rebeka Koha claimed the bronze with a junior world standard-breaking 227kg.

Koha also finished the competition with junior world standards in the snatch, 103kg, and the clean and jerk, 124kg.

Japan’s Mikiko Andoh was the clean and jerk bronze medallist with 131kg.

Action in Ashgabat is scheduled to continue tomorrow, when medals will be awarded in the men's 81kg and women's 64kg categories.