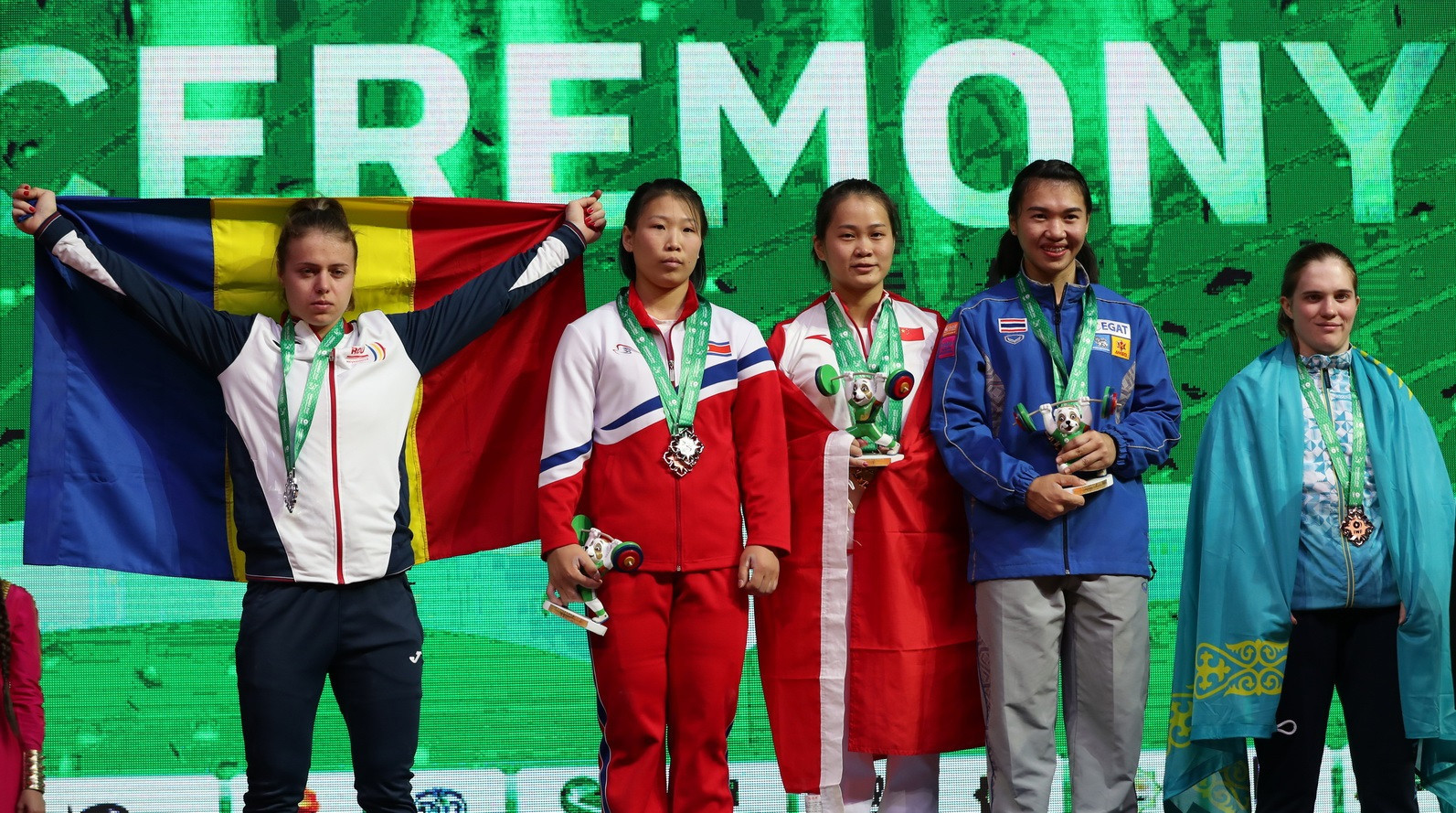 China's Deng Wei set world standards in the snatch, clean and jerk and total events to cruise to victory in the women's 64 kilograms category on a day dominated by her country at the 2018 International Weightlifting Federation (IWF) World Championships here in Turkmenistan's capital.

The Rio 2016 Olympic gold medallist became a four-time world champion with a total of 252kg, beating both silver medallist Rim Un Sim of North Korea and bronze medallist Rattanawan Wamalun of Thailand by a huge margin of 13kg.

Having won the snatch with a world standard-breaking lift of 112kg, Deng’s opening clean and jerk attempt at 135kg gave her a world standard total of 247kg and proved to be enough for overall victory.

Rim clinched the overall silver medal ahead of Wamalun by virtue of the fact that she posted the total of 239kg first.

They switched positions in the clean and jerk with Wamalun second on 137kg and Rim third on 134kg.

In the snatch, Romania’s Loredana-Elena Toma finished second with 110kg, while Group B competitor Karina Goricheva of Kazakhstan came third with 107kg.

Earlier in the day, China’s Lyu Xiaojun came out on top in the men’s 81kg total with a world standard-breaking 374kg after finishing second in both the snatch with 172kg and the clean and jerk with 202kg.

The 34-year-old, a three-time world champion and the London 2012 Olympic gold medallist at 77kg, was followed in the standings by Egypt’s Mohamed Ihab Youssef Ahmed Mahmoud with 373kg and then fellow Chinese Li Dayin with a junior world standard-breaking 372kg.

"This is over my expectations," Lyu said.

"I am not the youngest, but I still want to compete and I want my name against world records."

Rounding out the podium with 168kg was 20-year-old Li, bettering the junior world standard of 163kg which he set with his one other good lift.

His two previous lifts at 193kg and 198kg were also junior world standards along with the totals it gave him - 361kg and 366kg.

Mahmoud was the clean and jerk bronze medallist with 200kg, finishing 2kg behind Lyu.

He had twice broken the world standard total with 369kg and 373kg before Lyu’s best clean and jerk attempt took him to 374kg.

The United States’ Harrison James Maurus, the youngest in the category at 18 years of age, broke and lost the clean and jerk junior world standard to Li on three occasions.

He firstly managed a lift of 191kg, giving him what was then a junior world standard-breaking total of 348kg, and went onto also have success at 195kg and 200kg.

Thailand are second with nine golds, two silvers and four bronzes, while North Korea are third with three golds, one silver and one bronze.

Medals will be won in the women's 71kg and men's 89kg categories.