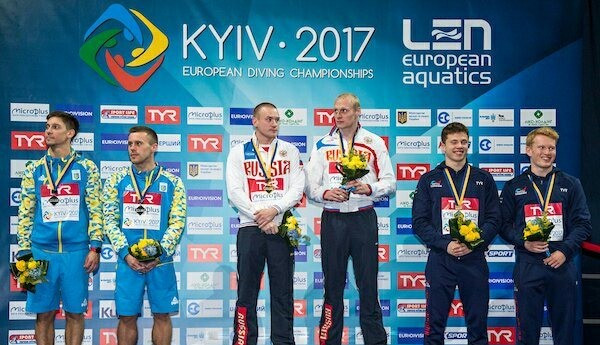 The duo captured the gold medal with a score of 427.71 points, beating home favourites Illya Kvasha and Oleg Kolodiy by a margin of just 0.75 at the Liko Sports Centre.

"As we expected, the Ukrainians were really tough opponents today," Kuznetsov said immediately after the event.

"We have noticed only in the very last moment that we are less than one point ahead in the final account.

"We can be satisfied with our performance."

Their score of 395.61 points saw them finish 2.22 clear of fourth-placed Germans Patrick Hausding and Stephan Feck.

Victory secured the 22-year-old a second title at the Championships having partnered Maicol Verzotto to mixed 3m synchronised success on Tuesday (June 13).

Russia’s Nadezhda Bazhina came second with 277.35 points, while a surprising bronze medal went the way of Germany’s Louisa Stawczynski with 271.80.

"My goal was to win a medal here in Kiev," Bertocchi said.

"Now I’ve got two golds out of two competitions."

Action in Kiev is due to conclude tomorrow with the men’s 10m platform and women’s 3m synchronised events.

The European Championships are the final major opportunity for the continent's divers to compete before this year's World Aquatics Championships, due to be staged in Budapest between July 14 to 30.