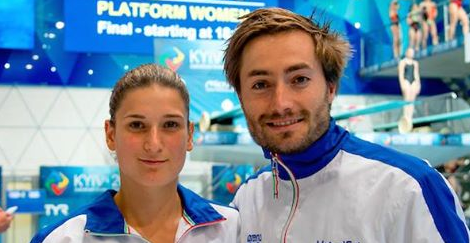 They posted a score of 287.88 points to secure first place at the Liko Sports Centre.

Verzotto became the first Italian male diver to win a synchronised medal in a World Championship when he took bronze alongside Tania Cagnotto in the 3m springboard event in Kazan in 2015.

The duo combined perfectly today, winning by gold by 4.92 points.

“This is a very good result for us," said Verzotto.

"Our goal was, of course, a medal.

"We knew we were facing a tough competition but in the end we were a bit better.

"We have done well, especially since we do not have too much experience in this competition.”

Much to the delight of their home crowd, Viktoriya Kesar and Stanislav Oliferchyk of Ukraine finished second on 282.96.

Germany’s Tina Punzel and Lou Massenberg rounded out the podium on 281.40.

She was followed in second and third place by two Russian competitors.

Anna Chuinyshena took silver on 326.90 and Iuliia Timoshinina rounded out the podium on 313.30.

Action in Kiev is due to continue tomorrow with the men’s 1m springboard and women's 10m synchronised platform events.

The European Championships are the final major opportunity for the continent's divers to compete before this year's World Aquatics Championships, which are due to be staged in Budapest between July 14 to 30.