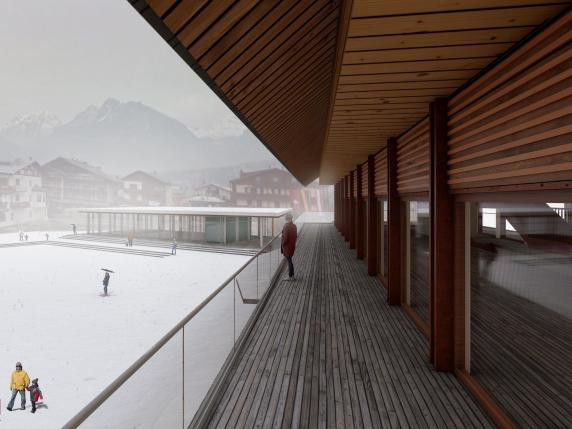 A proposal for a completely new ski stadium in Bormio has been presented to local officials by Mayor Silvia Cavazzi and architecture firm De Biasio.

If given the green light, the new stadium would be in place for the 2026 Winter Olympics.

Bormio is due to stage the men's downhill, Alpine combined, super-G, giant slalom and slalom events come 2026 on the Stelvio piste, plus the Olympic debut of ski mountaineering.

As reported by Corriere della Sera, the plan is to for the existing grandstand to be demolished and replaced by a raised platform.

It would have 2,500 moveable seats, while the overall capacity is reported to be 7,000 as the impending demolition of another building would allow for temporary stands.

A glass-heavy, multi-purpose hospitality area capable of housing elements needed for elite-level competition will further be built in place of a disused cable car.

"The idea is that of a natural amphitheater, with functional and light elements, with no impact," Bormio Mayor Cavazzi said, per Corriere della Sera.

"Wood and stone will be preferred as materials."

A feasibility study still needs to be completed before the project can be approved, but officials want to start construction work in the second half of next year.

Funding is already secured for sweeping upgrades to the Bormio ski area which this project headlines.

In Milan Cortina 2026 bid documents, only six months of construction was claimed to be needed in Bormio.