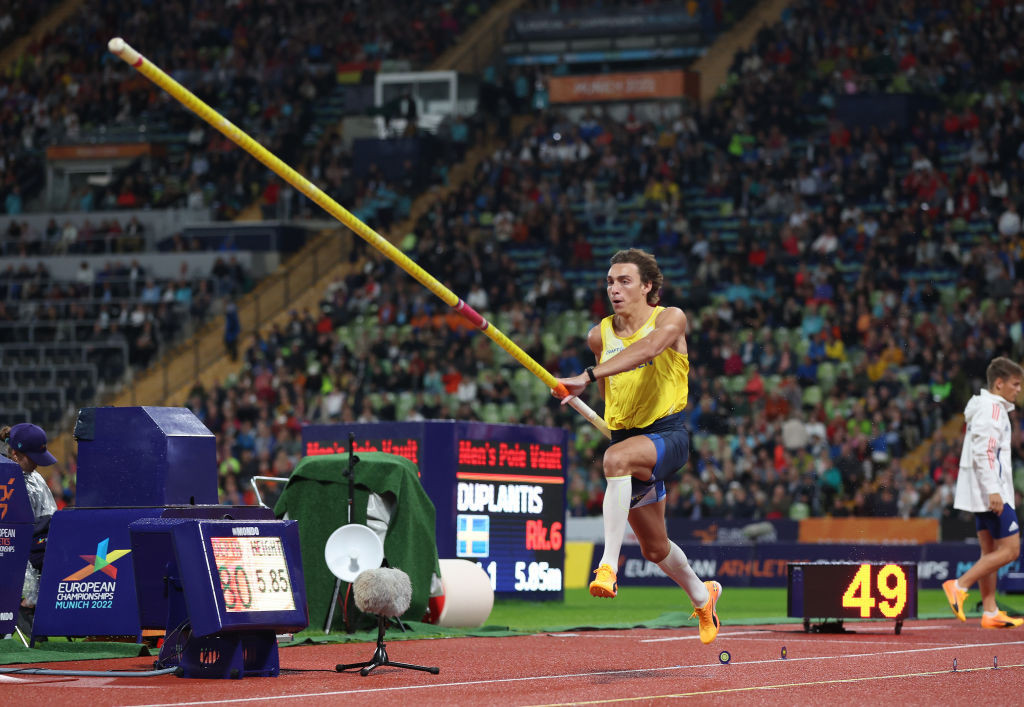 Three first-time clearances, at 5.65 metres, 5.85 and 5.90 were enough for world and Olympic pole vault champion Duplantis to retain the European title he won four years ago.

That only left the question of how high to try and jump before he concluded his efforts, and the 22-year-old Swede selected 6.06m, one centimetre more than his Championship record in Berlin, clearing it first time.

While the rain had abated, the wind was still gusting, as evidenced by the flags that fluttered constantly on the rim of the stadium, making conditions difficult for all competitors.

Other than Duplantis, the man who managed best was 23-year-old home vaulter Bo Kanda Lita Baehre, 11th at the Tokyo 2020 Olympics and seventh at last year’s World Championships, who earned silver with a best of 5.85m.

The second Championship record arrived in the women's 3,000m steeplechase when Gega finished in 9min 11.31sec, chased home by Germany’s Lea Meyer in a personal best of 9:15.35 and Britain’s Elizabeth Bird, who earned bronze in 9:23.18.

It was the first European outdoor title to be won by Albania.

And she smashes the championship record with 9:11.31!#Munich2022 #BackToTheRoofs pic.twitter.com/tAXhqM2Dif

The women’s 4x400m final saw Bol, who completed a unique 400m/400m hurdles double last night, adding a third gold as she anchored the Dutch team to victory in 3:20.87, the fastest time run in Europe this season.

After the early-evening thunderstorm a huge rainbow emerged here shortly before the women’s 800 metres got underway, fading away once the race was over.

By which point Hodgkinson, silver medallist at last year’s Olympics and this year’s World Championships and Commonwealth Games, had discovered gold at the end of it.

The 20-year-old made her decisive move 250 metres from the end, taking over the lead from the fading home force of Christina Hering and driving remorselessly for the international title she has sought with such intensity in the past 12 months.

Only as she crossed the line, in 1:59.04, did the concentration break, and her right arm came up in joyful acknowledgement.

So cool and completely dominant. ?@keelyhodgkinson was unstoppable in the 800m final! ✨#Munich2022 #BackToTheRoofs pic.twitter.com/gw7OMrrlsc

France’s fast-finishing Renelle Lamote came through in 1:59.49 for a third consecutive European silver, but looked glad rather than sad about it, with bronze going to Poland’s Anna Wielgosz in 1:59.87, with Hering fading to seventh.

"I think it's more of a mental thing coming into this being my third Championships in four and half weeks, so, it was definitely about picking myself up and focusing," Hodgkinson said.

"It is still very tough competition out there, so I made sure I was on the ball - I am just happy I executed well, and managed to come away with a gold medal."

Britain’s men’s 4x400m relay team then delivered a second gold on the night with a performance that called to mind the epic Tokyo 1991 World Championships victory over the United States, where the favourites were confounded by the sight of individual silver medallist Roger Black running the first leg.

In this case Matthew Hudson-Smith, who retained his individual 400m title here, ran the opener for Britain, handing over to fourth-placed Charles Dobson, who had a five metres lead when the lanes broke.

Lewis Davey did well to hang on to the lead under heavy pressure, enabling individual bronze medallist Alex Haydock-Wilson - the man who says he sees angels and devils on the track - maintaining his advantage to the line to bring his team home in 2:59.35.

Who knows what combination of visions he saw in that long finishing straight as Belgium’s Dylan Borlee and Thomas Jordier of France strove to overtake.

There was a strong Albanian aspect to another gold-medal winning performance as 19-year-old javelin thrower Elena Tzengko earned the fourth title for Greece at these Championships.

Tzengko, the daughter of Albanian immigrants who gained Greek citizenship in 2018, led from start to finish, opening with 60.82m and following up with her best of the night, a personal best of 65.81, before concluding with 64.57.