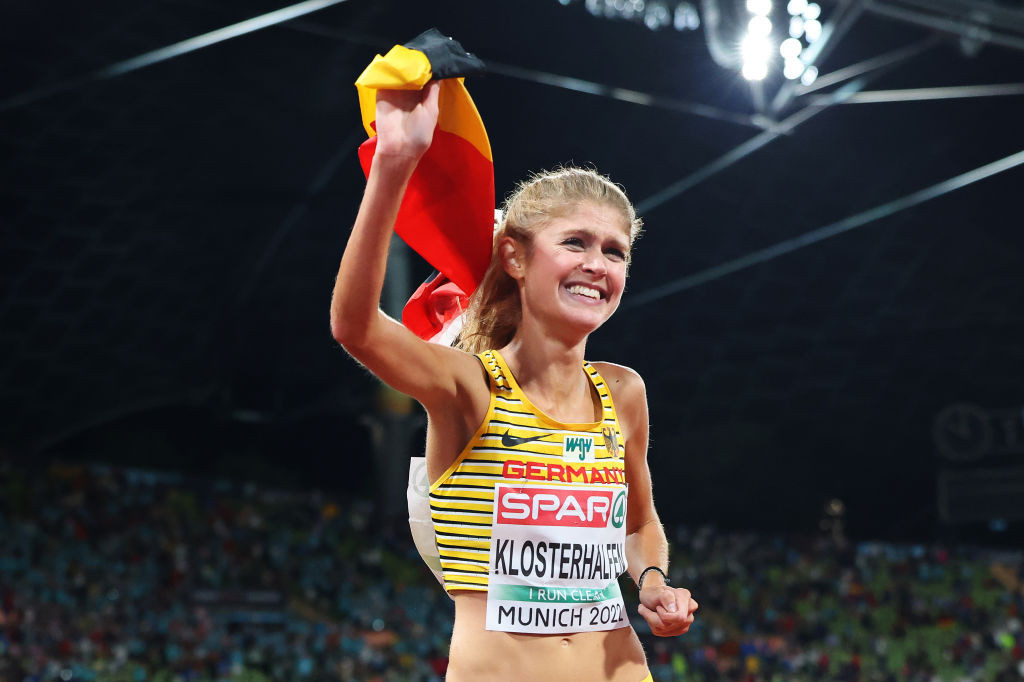 Konstanze Klosterhalfen became the latest German to feel the golden power of the home crowd here at the European Athletics Championships, as on an evening where the action was delayed for a rainstorm, she won the women’s 5,000 metres title, but the trick couldn’t quite work for home long jumper Malaika Mihambo.

The Tokyo 2020 gold medallist’s participation on home soil had been in doubt after she had contracted coronavirus after retaining her world title in Eugene last month.

She produced the goods, however, with a 7.03 metres effort - only to have to accept silver as Serbia’s 32-year-old Ivana Vuleta, nee Spanovic, secured a second European outdoor title following her success in 2016 with a first-round jump of 7.06m, third best of the season, with Britain’s Jasmin Sawyers taking bronze on 6.80m.

Elsewhere in the programme at the Olympiastadion in Munich, Norway’s Jakob Ingebrigtsen successfully completed the defence of his European 1500 and 5,000m titles, clocking a Championship record of 3min 32.76sec in the shorter distance, and Italy’s joint-Olympic champion Gianmarco Tamberi won high jump gold with a best of 2.30m.

Klosterhalfen, world bronze medallist in 2019, was hugely disappointed at finishing one place off a medal in the earlier 10,000m, but she came good on the night to win in 14:50.47 after a long pursuit of Yasemin Can, the Kenyan-born Turkish runner who had won the title at the longer distance and was seeking to reproduce the 5,000/10,000 double she achieved at the 2016 European Championships in Amsterdam.

Just as she had in the 10,000m final, Can pushed decisively ahead as the race moved into the second half, and she gained a 10 metre lead from Klosterhalfen and Britain’s 10,000m silver medallist Eilish McColgan.

But as the noise levels rose, the lead diminished, with both pursuers, ponytails swinging, making it clear that they were not going to let Can run clear as she had in the 10,000m final.

As the lead trio came round with two laps remaining McColgan was fading, but the home runner was closing in on the greatest win of her career.

On the home straight Klosterhalfen - who failed to qualify from last month’s World Championship 5,000m heats after recovering from coronavirus - had made her move and passed the Turkish runner, and the decibel level rose. But Can was not finished either and there was only a couple of metres in it at the bell.

Gradually, inexorably, the cocktail of determined athlete and energised crowd lengthened the gap between the lead pair. Klosterhalfen looked almost agonised with joy as she crossed the line, with Can second in 14:56.91 and an exhausted McColgan, who now has Commonwealth gold and silver and European silver and bronze, third in 14:59.34.

"The audience carried me so much," Klosterhalfen said. "After those two difficult years, to win a gold medal at European Championships on home soil, this is just amazing, I have tears of joy.

"I am on cloud nine. I do not have words to describe my feelings. It is a dream come true. The crowd gave me everything."

Earlier, the 21-year-old Olympic 1500m champion Ingebrigtsen had shown customary ruthlessness as he took a grip on the race in the first 300 metres and never let go, winding up the pace before concluding with an irresistible last lap of 55.25 seconds.

"I felt I have this speed in my legs today so I wanted to go fast from the beginning," Ingebrigtsen said.

"I wanted to have a fast race and I wanted to win. Also, when I heard the great home crowd cheering for us and I also saw so many Norwegian flags in the stands, it was a great motivation for me today.

A bronze medal and a hug from Gianmarco Tamberi. ?

"The fans here are just awesome. The rain - it feels almost like at home. Rain feels good. I am very glad I managed this double and the Championships record is a nice bonus."

Tamberi was in his usual hyperactively exuberant form after securing another big gold, with Germany’s Tobias Potye taking silver on countback from Ukraine’s Andriy Protsenko as both cleared 2.27m.

His victory chimed in with the news announced earlier in the day that the 2024 European Athletics Championships, set for Rome, will take place between June 7 and 12.

"We have been very happy to work with our Italian friends and partners to find the optimum date in the calendar for our Championships and we are confident that Europe’s top athletes will be there to bid for glory and use this competition as a vital stepping-stone en route to the Paris 2024 Olympic Games later in the summer," said European Athletics President Dobromir Karamarinov.

"We look forward to organising, with the support of European Athletics, a great edition of the Championships in Roma," added Italian Athletics Federation President Stefano Mei.

Nowicki’s big throw in the men's hammer final came in the fifth round of the contest, allowing him to overtake Hungary’s Bence Halasz, who claimed silver with a personal best of 80.92m ahead of Norway’s Eivind Henriksen on 79.45m.

In the heptathlon Thiam won only one of her seven disciplines - the high jump, where she beat her own Championship record with 1.98m - but she remained in top position from the second event onwards and finished almost 100 points clear of Annik Kalin, who scored a Swiss record of 6515 and her Belgian compatriot Noor Vidts, who totalled 6467 for bronze.