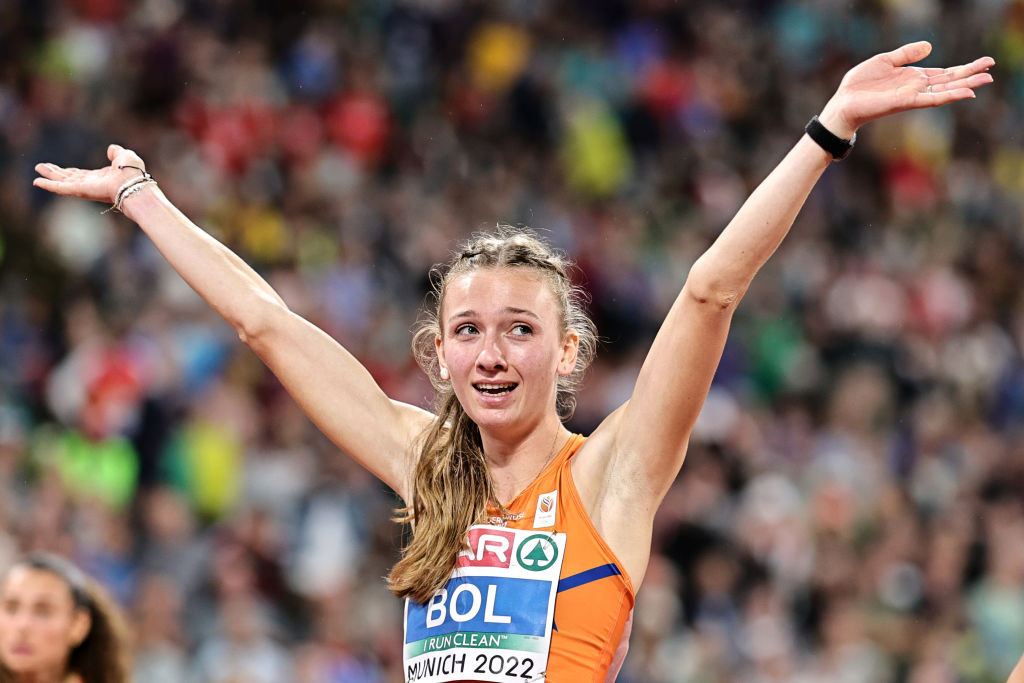 Championship records in the women’s and men’s 400 metres hurdles fell here tonight at the European Athletics Championships, as Femke Bol of The Netherlands completed a unique double in 52.67 seconds and Norway’s Olympic champion and world record holder Karsten Warholm, retained his title in 47.12.

Britain’s Laura Muir retained her women’s 1500m title in magisterial fashion and her team-mate Zharnel Hughes won the men’s 200m gold, but Dina Asher-Smith, defending champion in the women’s 200m, had to settle for silver behind Switzerland’s Mujinga Kambundji.

Ukraine’s Maryna Bekh-Romanchuk, devastated the previous evening after a marginal foul had ruled out her huge final effort in the women’s long jump, leaving her out of the medals, made up for that tonight as she won the triple jump with a personal best of 15.02 metres.

In the men’s discus this season’s new kid on the block, 23-year-old world discus champion Kristjan Ceh of Slovenia, performed mightily with a best of 68.28m to beat a field containing Sweden’s Olympic champion Daniel Stahl – only to be beaten by the even newer kid on the block, 19-year-old Mykolas Alekna of Lithuania, who won gold with his fifth-round 69.78m.

Bol, 22, already 400m champion, had said before competition began that this could be a chance to go for this rarely attempted double, now has a major gold to go with the Olympic bronze and world silver she has won in the space of the last year.

There were huge celebrations for Ukraine as Viktoriya Tkachuk and Anna Ryzhykova took silver and bronze in 54.30 and 54.86 respectively.

Warholm, injured for much of the season, who produced one of the highlight races at last summer’s Olympics as he earned gold in a huge world record of 45.94, managed just one hurdle in his first race of the season at the Rabat Diamond League meeting in June before pulling up with a hamstring tear.

Characteristically, after intensive rehab, he put himself into the fire at last month’s World Championships, and reached the final, finishing seventh in 48.42.

A month better prepared, he seized the race in habitual fashion, going for broke, hoping broke didn’t happen - and it didn’t.

Warholm turned into the straight ahead, and pushed on, as in previous days, to open a big lead and an impressive winning time.

In the women's 1500m, Muir ran a superbly judged race to retain her title and add another gold to the Commonwealth version she won earlier this month and the world silver earned last month.

Between them, she and her Scottish compatriot Eilish McColgan, who has earned Commonwealth gold and silver, and European silver and bronze, have had a richly rewarding five weeks.

The 29-year-old Olympic silver medallist monitored proceedings from the back before moving deliberately to the front with two laps remaining, taking over the lead from Ireland’s Ciara Mageean, and then accelerating with brutal decisiveness just before the bell.

Hughes added 200m gold to his 100m silver with an unanswerable final 80 metres which saw him draw away from his compatriot and erstwhile relay comrade Nethaneel Mitchell-Blake to cross in 20.07.

But Mitchell-Blake hung in there to take silver in 20.17 ahead of the Italian who beat him to the line in the final leg of the Tokyo 2020 4x100m, Filippo Tortu, who earned bronze in 20.27, preventing what would have been a British clean sweep as 22-year-old Charles Dobson faded slightly over the final 50 metres to finish fourth in 20.34.

Kambundji, beaten to gold in the women’s 100m on Tuesday (August 16), by just five thousandths of a second, was certainly due a change of luck at these Championships, where four years ago she finished fourth in the 100, 200 and 4x100m.

Having earned an unexpected world indoor title in March, the 30-year-old Swiss athlete found the way to the top of the podium again after arriving into the home straight slightly behind Asher-Smith, who was clearly set on earning a tangible reward from these Championships after dropping out of contention while defending her 100m title with a calf strain she ascribed to having her period.

The Swiss runner earned a metre clearance, and nothing the Briton could do altered it. Kambundji won in 22.32 with Asher-Smith, whose world and Commonwealth campaigns yielded no rewards, earning her first big medal of the year in 22.43.

Bronze went to Denmark’s Ida Karstoft, who clocked 22.72 to finish ahead of Britain’s Jodie Williams, who finished in 22.85.

After the agony came the ecstasy for Bekh-Romanchuk in the women's long jump, as she produced four scoring efforts that were all superior to anything her opponents could manage, starting with 14.81m and concluding with a huge fifth-round personal best of 15.02.

Kristiina Makela took silver in a Finnish record of 14.64m, and bronze went to Israel’s Hanna Minenko on 14.45.

"Today it is a big evening for Ukraine with three medals for us - for all Ukrainian people, we need these positive emotions and these victories," Bekh Romanchuk said. "I jumped for them."

Ceh looked as if he had a second big gold of the summer sorted thanks to his 67.81m in the third round of the men's discus, but Alekna - son of Virgilijus, the 2000 and 2004 Olympic champion - confounded him with his best effort, and although he responded well, he fell short.

Bronze went, unexpectedly, to Britain’s Lawrence Okoye with a first-round best of 67.14.

Raitanen made a decisive move with 200 metres to go to overtake Italy’s Ahmed Abdelwahed and Osama Zoghlami, the latter of whom had led for much of the race in tandem with his twin brother Ala.

Gritting his teeth, the 26-year-old from Tampere gained significantly on the final water jump and last obstacle before pulling clear to win in 8:21.80, with Abdelwahed taking silver in 8:22.35 and Zoghlami earning bronze in 8:23.44, with Spain’s Daniel Arce fifth in 8:25.00.