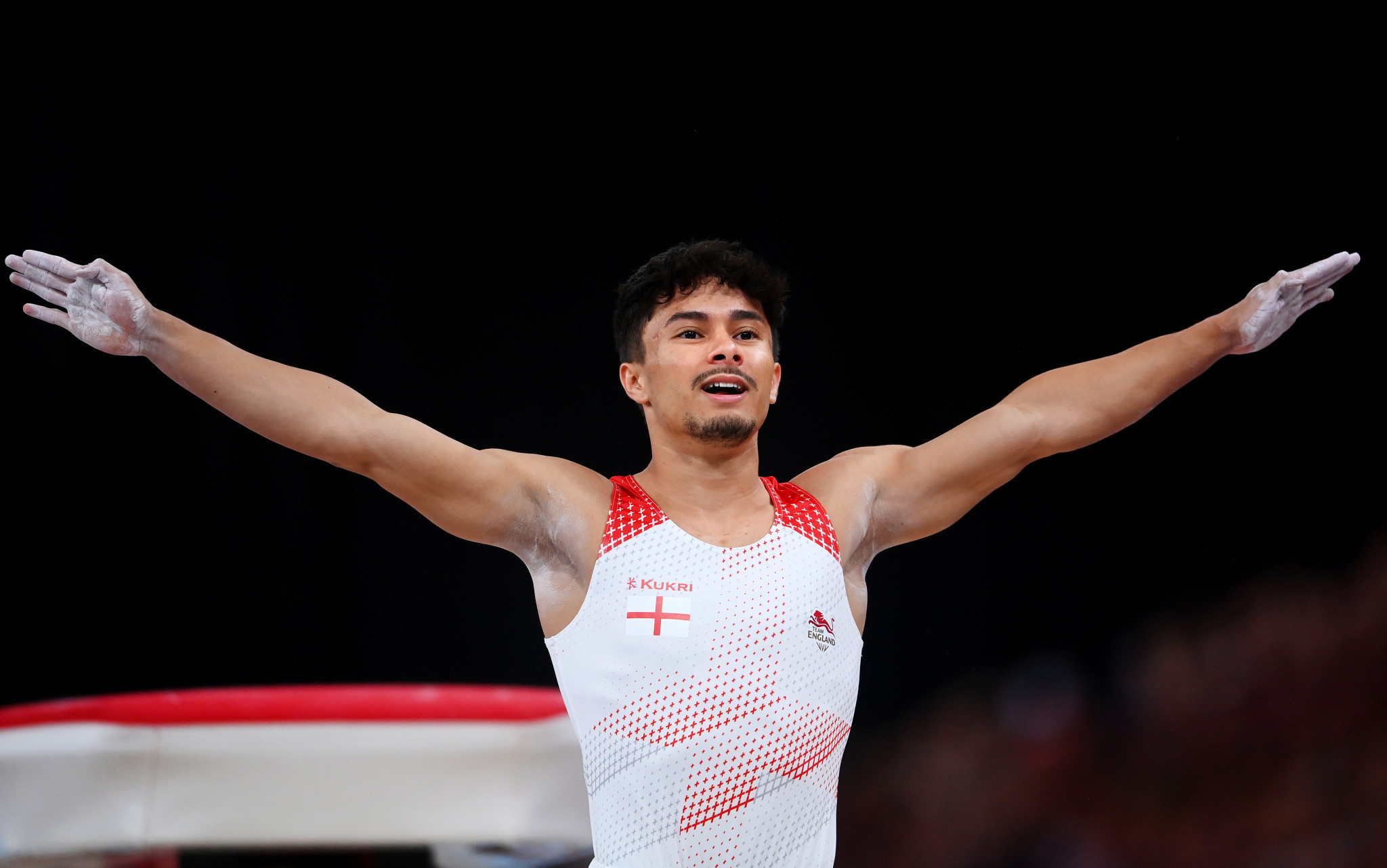 Jarman went into the vault final as the leading qualifier and duly delivered on the high expectations to become the first male English athlete to win four golds at a single Commonwealth Games since shooter Mick Gault at Kuala Lumpur 1998.

Fellow English gymnast Claudia Fragapane also won four golds at a single Commonwealth Games at Glasgow 2014, before adding a fifth in Birmingham as part of the women's team.

The 20-year-old caused the crowd to erupt after he landed a double-pike dismount on his second attempt for 15.200 points and an average of 14.916, putting him above then-leader James Bacueti of Australia on 14.283 at the Arena Birmingham.

Jarman's compatriot Giarnni Regini-Moran then shunted Bacueti down to third and secured silver with 14.633 points, to the further delight of the home fans.

"To be able to come here and enjoy it and produce an amazing result, I am absolutely honoured," said Jarman, who had also won the floor exercise, and individual and team all-around titles.

"I'm going to find somewhere in my house to store them [four gold medals] - maybe a glass cabinet… if there's space."

Team-mate Joe Fraser then picked up his third gold of the Games, after team all-around and pommel horse success, with an astounding display on the parallel bars.

Despite having a fractured foot, Fraser was awarded 15.000 points to win gold and lead another England one-two as Regini-Moran won another silver on his 24th birthday with 14.733 points.

A superb routine to win the last artistic gymnastics final of the 2022 Commonwealth Games. A huge congratulations to Alice 🏴󠁧󠁢󠁥󠁮󠁧󠁿#B2022 pic.twitter.com/JPiFHzgioq

England secured another one-two finish as Alice Kinsella scored 13.366 in the women's floor exercise, beating 18-year-old Ondine Achampong, who won her second individual silver medal of the Games on 13.033 points.

Emily Whitehead of Australia snuck into the bronze-medal spot after being awarded 13.000 points on the final routine of the event.

Georgiou's brother Ilias sent shockwaves through the arena after a superb routine in the men's horizontal bars saw him snatch a last-gasp gold with 14.466 points.

Marios pocketed bronze with 14.133 points while Australian Tyson Bull was shunted to silver with 14.233 points.

Kate McDonald denied Australian team-mate Georgia Godwin her third gold medal of Birmingham 2022 by taking victory in the women's beam with 13.466 points to 13.433.

The results put England top of the artistic gymnastics medals table with 10 gold, five silver, and one bronze medal while Australia and Cyprus followed behind with three and one gold medal, respectively.