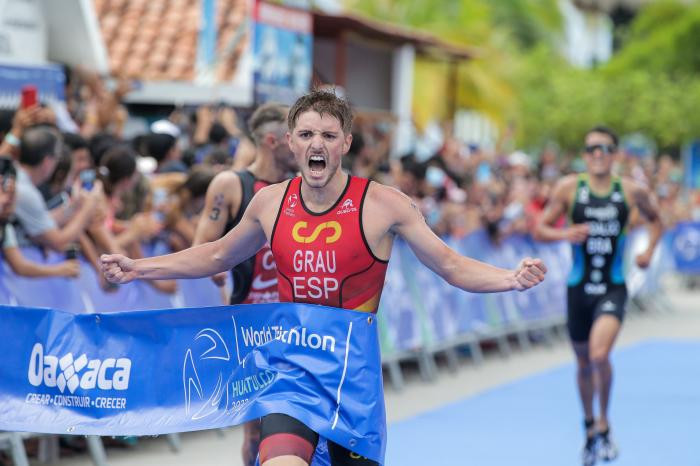 Genis Grau of Spain came out on top and claimed a first career gold in a topsy-turvy sprint finish at the World Triathlon Cup in Huatulco in Mexico.

In a three-way contest for the victory, Grau sprinted ahead of Canada's Tyler Mislawchuk and Miguel Hidalgo of Brazil in the final few hundred metres to take the win in a time of 53min 47sec.

Lying a few seconds off the pace after his swimming leg, he recovered with with a blistering 20-kilometre bike ride before the deciding run.

Mislawchuk, who had previously won in Huatulco on two occasions, won the silver medal just a second behind Grau, while Hidalgo repeated his 2021 result by coming third a further two seconds back.

The faces say it all! A titanic battle down the #HuatulcoWC blue carpet ends with a debut victory for Genis Grau 🇪🇸 who had just enough in the tank to deny Tyler Mislawchuk 🇨🇦 a third straight gold, Miguel Hidalgo 🇧🇷 with another dynamite display for bronze!#Triathlon pic.twitter.com/QyWI64AuoE

"I swam well and managed to stay with the leaders on the bike, then found myself with the leading athletes on the run," Grau said.

"I was dropped a couple of times but knew I had a powerful sprint and just went for it right before the finish line."

Despite a last-minute lunge to catch Hidalgo, home hopeful David Nuñez of Mexico just missed out on the podium in fourth.

The next event on this year's World Triathlon Cup circuit will be in Pontevedra, and is due to take place on July 24.