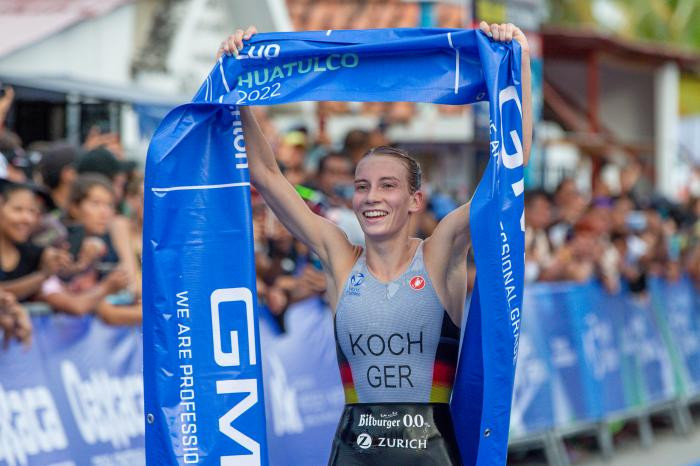 Annika Koch of Germany produced a professional display to earn her maiden title at the World Triathlon Cup.

The 23-year-old combined a speedy second transition with the race's quickest five kilometre run time to claim gold in the Huatulco heat with a time of 1hr 00mins 01secs.

Canada's Emy Legault took over a minute longer between her bike and run and it ultimately cost her, as she finished runner-up 12 seconds behind Koch but still achieved her first World Cup podium.

Up to that point, she had posted a much faster bike ride than her competitor and gone toe-to-toe in the 750-metre swim.

"It’s amazing, I hoped for a podium and I felt good the whole race," Koch said.

"I mean, you always race to win but it doesn’t happen that often - it’s just the best feeling."

Silver medallist Legault said of her performance: "At first I couldn’t believe it, but it is starting to soak in now so I’m pretty happy.

"On the bike it was just about staying safe.

"We had a lot in the front pack, people were moving sideways a lot, so I tried to stay towards the front without spending too much energy which played out well."

Bianca Seregni of Italy took the bronze medal in 1:00:15 after swimming fastest, a vast improvement on her 12th placed finish at last week's World Cup race in Arzachena, Italy.

The bronze medallist in that race, Luisa Baptista of Brazil, came a disappointing sixth some thirty seconds off the podium.

Mexico's best effort on home turf came from Rosa Tapia, who initially kept pace in the swim and bike legs but crossed the line in fifth after fading on the run.

The World Triathlon Cup event in Huatulco will continue tomorrow, with the men's elite race set to be contested.