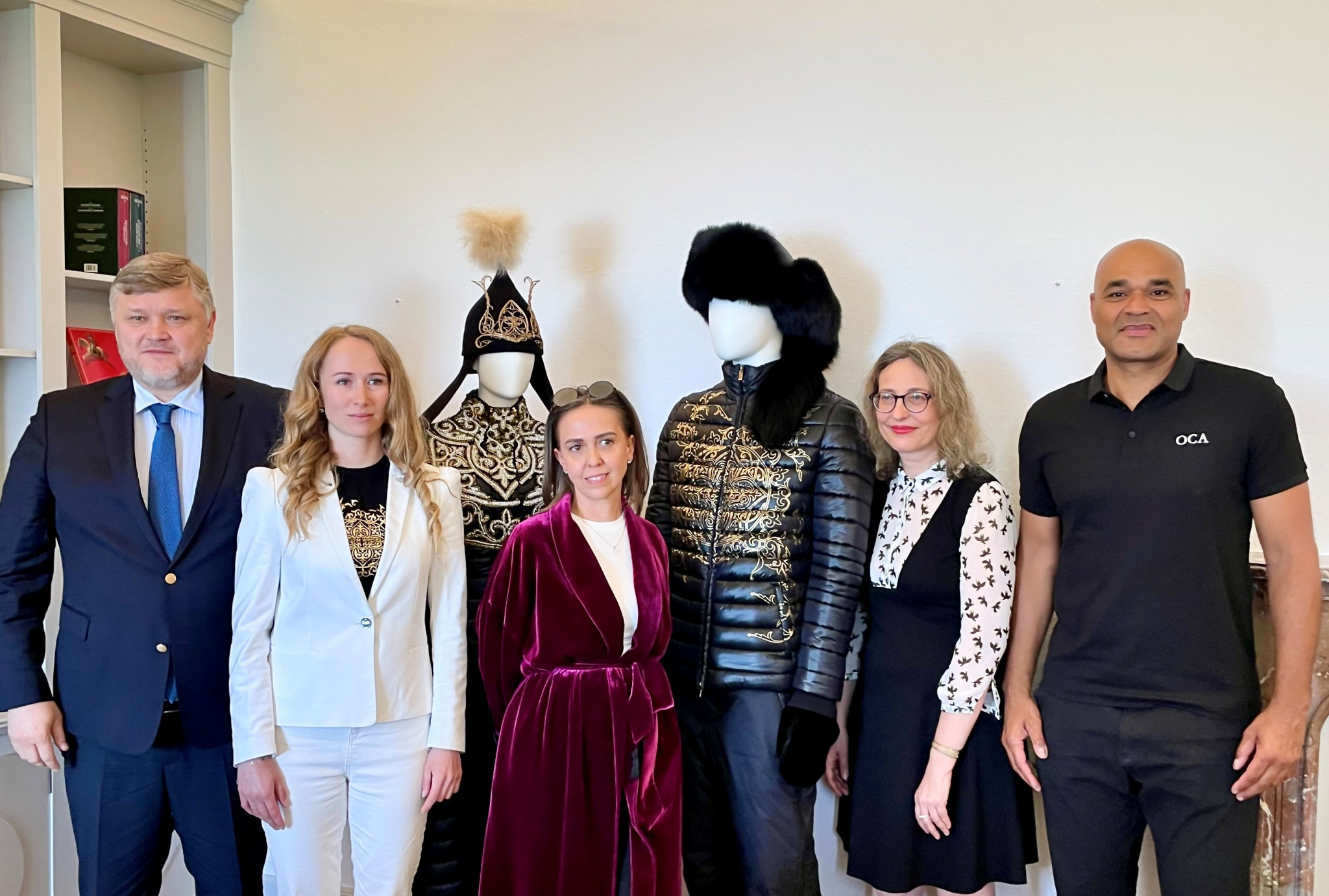 The costume worn by Kazakhstan’s flagbearers at the Opening Ceremony of this year’s Winter Olympics in Beijing has become part of the Olympic Museum’s heritage collection here.

A delegation from the National Olympic Committee of Kazakhstan (HOK) attended a ceremony today where the handcrafted black costume adorned with Kazakh national gold ornaments was put on display.

Speed skater Yekaterina Aidova and short-track speed skater Abzal Azhgaliyev wore the outfits when they carried the Kazakh flag into the Bird’s Nest Stadium at Beijing 2022.

"I am really proud because this is my country and they gave me the chance to be the athlete to wear this beautiful national dress," Aidova told insidethegames.

"This is all about Kazakh history which is really important as we want to show that Kazakhstan is a country that has many cultures.

"It doesn’t matter who you are, you know that you live here and you love your country.

"It feels like a dream to be in the Olympic Museum - it is a sacred place and I am really happy that Kazakhstan has an object here that everyone can see and learn about Kazakh people."

It is a fitted black down coat with gold ornaments decorated with stones, beads and crystals.

The 'Saukele' headdress with a unique hand-made pattern was also created by Kazakhstani craftsmen, while the gloves were knitted from black merino wool.

The central theme of the decoration represents the sun, and the 'Koshkar muyiz' pattern on the costume is combined with a floral ornament.

"We intended not to simply make a beautiful costume, but to fill it with deep meaning," said Ivanova.

"The ornament is based on the source of the most powerful life energy - the sun, and the golden is the colour of the winners.

"Black symbolises depth and wisdom, and it also refers to the Kazakh traditions passed down to generations for hundreds of years.

"Creating the costumes for the Olympic Games Opening Ceremony will forever remain the most incredible experience for our team and the costume designer."

The Olympic Foundation for Culture and Heritage offered the HOK to include the costume in the Olympic Museum's collection that brings together athletes’ uniforms tracing the history of the Olympics.

"We are really happy that the National Olympic Committee of Kazakhstan and athletes, responded favourably to our request," said Patricia Raymond, senior collections manager for the Olympic Museum.

"The silhouette and fine embroideries reflect a rich national tradition and I can imagine that both Aidova and Azhgaliyev must have felt proud to wear them and represent their country.

"It will be conserved with great care and presented in exhibitions in Lausanne and elsewhere around the world."

"The costume was designed to showcase the richness of history and beauty of Kazakhstan, along with the traditions and values of our people," said Kulibayev.

"Thanks to the outlook, created by the Kazakhstani designers and presented by Yekaterina and Abzal, the rich Kazakh culture will be preserved in the heart of the Olympic Movement - in Lausanne.

"I believe this donation from Kazakhstan would figure prominently at the Olympic Museum and delight its visitors, as it happened at the Beijing Olympics Opening Ceremony."

Andrey Kryukov, secretary general of the HOK, added: "We are absolutely delighted that it will be part of the museum and remain here forever.

"As a country, we are very proud.

"The Olympic Games is not just about sport, it is about culture, art and spirit.

"We hope that this will inspire other nations to impress in a more beautiful way at the next Olympics and add value to the cultural part of the Games."