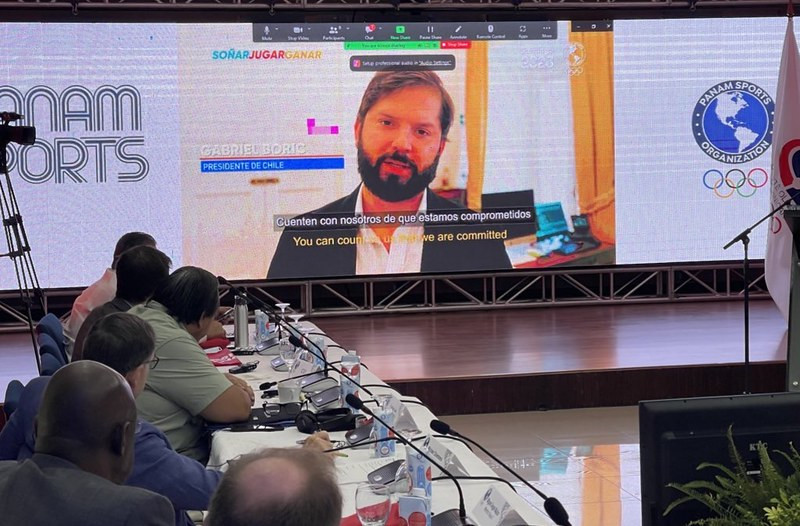 New Chilean President Gabriel Boric has offered reassurance of his commitment to the Santiago 2023 Pan American Games in a video address during the latest Panam Sports Executive Committee meeting.

Boric took part in the meeting in Dominican capital Santo Domingo via a pre-recorded video.

"You can count on us that we are committed to these Games and that we hope they will be a celebration not only for Chile but for all our America," Boric said.

"A big hug, we are committed to sport."

Chile's Sports Minister Alexandra Benado and Santiago 2023 chief executive Gianna Cunazza joined the meeting to give an update on the Organising Committee's progress.

Organisers are "working very well" was the verdict of Panam Sports President Neven Ilic - although he did add that "I think they need to pay more attention to the matter of infrastructure".

"The Pan American Village is very advanced and as for the other venues, there are some that have already been delivered while others are in that process.

"But I think we still have time to arrive to the Games in great shape."

The election of left-leaning Boric as President in December - the country's youngest-ever leader, aged just 35 - could have impacted preparations.

However, Boric has thrown his weight behind staging the multi-sport event and added in the video message that he believes it is possible it "generates a legacy that also serves our societies."

Ilic is a former Chilean Olympic Committee (COCH) President, and the man who followed him as COCH leader was at the meeting in Santo Domingo too and impressed with the Santiago 2023 presentation.

"I'm very happy with the presentation, since the Minister and the chief executive gave an account of the real situation in which we find ourselves," COCH President Miguel Ángel Mujica added.

"We are staying calm but also alert and confident that this challenge we have taken on will be faced in the best way.

"I also publicly thank President Boric for maintaining his commitment to the Games."

The next edition of the Pan American Games is set to take place from October 20 to November 5.

"As the Executive Committee we are very happy and proud of what we are doing with the Panam Sports Channel," Ilic said.

"Soon we will be at Guadeloupe 2022 [Caribbean Games], the Pan American Swimming Championship and many other events.

"We are growing and it is very important for us to continue promoting these sports."