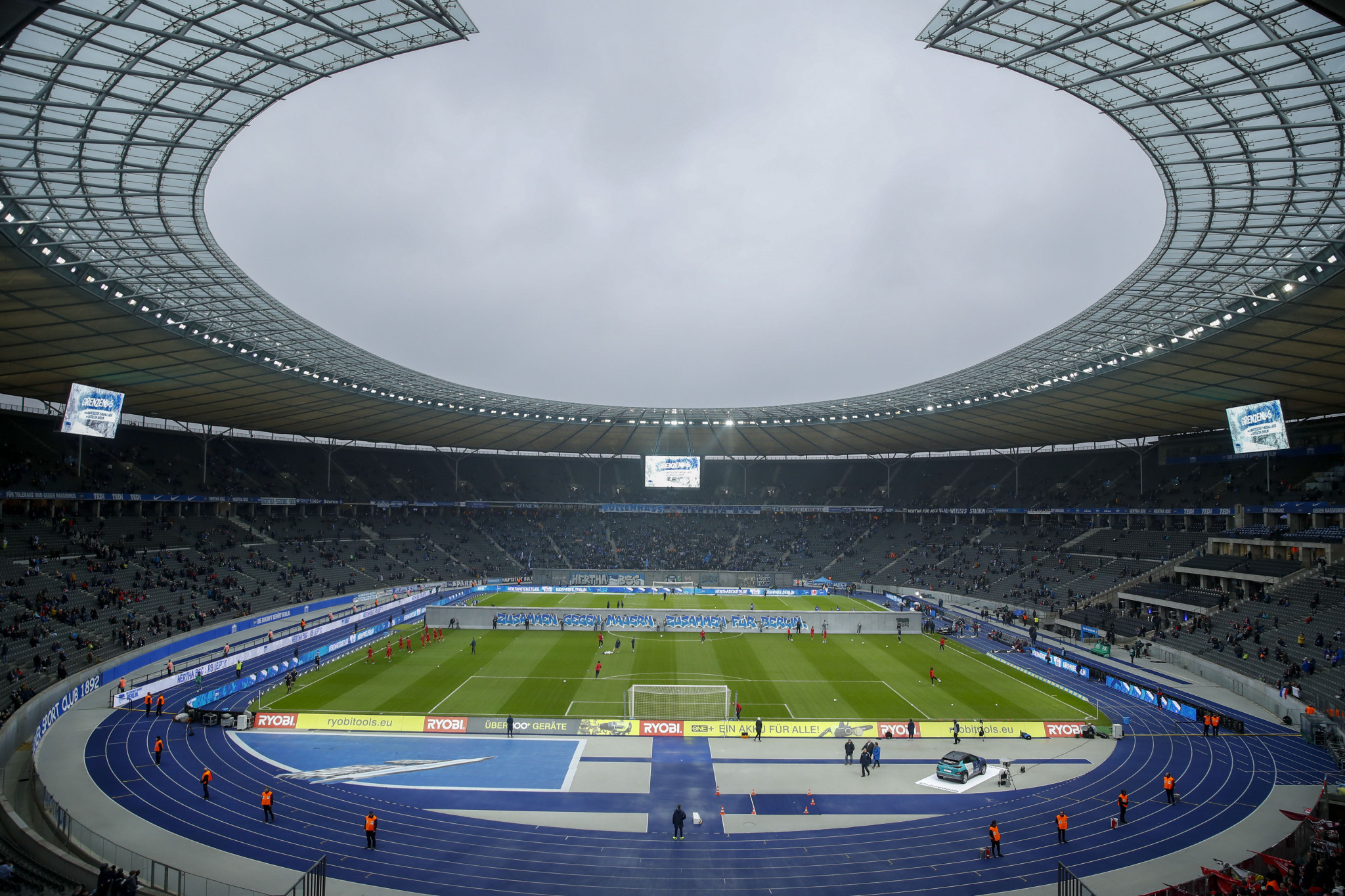 The Olympiastadion in Berlin is set to stage the deciding match at football's 2024 European Championship, following a decision taken at today's UEFA Executive Committee meeting in Vienna.

The 74,745-capacity stadium in Germany's capital was purpose-built for the Berlin 1936 Olympic Games, and renovated to stage the 2006 FIFA World Cup final, won by Italy against France.

The venue in Berlin is set to follow London's original Wembley Stadium, Rome's Stadio Olimpico and the Olympiastadion in Munich - main venues for the 1948, 1960 and 1972 Olympics, respectively - as well as Madrid's Santiago Bernabéu and Paris' Stade de France in staging UEFA and FIFA's biggest matches in men's football.

Munich's Allianz Arena - known as the Fussball Arena for UEFA competitions - had been viewed as Berlin's sole rival for the Euro 2024 final, but it has instead been awarded the opening match, which it also held at the 2006 World Cup.

The venue can hold 70,000 spectators for international matches, and held four matches at the delayed men's Euro 2020 last year.

Munich and Berlin have held the men's UEFA Champions League finals in 2012 and 2015 respectively, with Allianz Arena set to stage it again in 2025.

Euro 2024 is only the second edition out of the last five due to be held in one country.

In a shift away from the controversial pan-European Euro 2020 - which most dramatically required Poland to travel from Saint Petersburg to Seville and back to the Russian city to play their three Group E matches - UEFA's Executive Committee has agreed to introduce a "cluster" system for the 2024 match schedule, aimed at reducing travel distances.

Host cities have been divided into three regions - Berlin, Hamburg, Leipzig in the north and north-east cluster; Dortmund, Düsseldorf, Frankfurt, Gelsenkirchen and Cologne in the west; and Frankfurt, Munich and Stuttgart in the south.

The group-stage schedule is to be arranged so that matches in the six groups are played across two clusters.

UEFA claimed that this will favour teams "travelling by train or bus from their base camps to the match venues".

Regulations for Euro 2024 were approved by the Executive Committee, and are due to be published on Monday (May 16).

This will move away from the eight groups of four followed by a knockout stage format to a so-called "Swiss system" and expand the competition from 32 to 36 teams.

UEFA had controversially proposed that two of these extra four places would be awarded to clubs based on their historic performance in European competition, which critics likened to the much-maligned and short-lived European Super League, a breakaway project of 12 clubs which collapsed only days after its formation last year.

These two places will instead be awarded to the highest-placed non-qualifying teams in the two countries with the best collective performance by their clubs in the previous season.

Another amendment to UEFA's initial plans is that the group stage will consist of eight matches rather than 10, although this still represents an increase on the current six.

Whereas clubs currently face each other home and away in a round-robin group at present, the Swiss system involves a single league phase in which clubs will face eight of the other 35 teams.

The eight top-ranked clubs advance to the knockout rounds, with those placed ninth to 24th competing in two-legged playoffs to secure their place in the last 16.

Similar changes have been applied to the second- and third-tier Europa League and Conference League, although teams will play only six matches in the league stage in the latter competition.

Club licensing regulations for the UEFA Women's Champions League were approved, as well as competition regulations for various tournaments including the men's and women's Under-17 and Under-19 European Championships in 2022 and 2023.

UEFA President Aleksander Čeferin argued that the changes showed that the governing body is "fully committed to respecting the fundamental values of sport and to defending the key principle of open competitions, with qualification based on sporting merit, fully in line with the values and solidarity-based European sports model".

Technical regulations including the UEFA Disciplinary Regulations and UEFA Equipment Regulations were approved at the meeting.

Austria's capital Vienna is also the host city for tomorrow's 46th Ordinary UEFA Congress, due to be held at the Messe Wien Exhibition and Congress Center.

According to Russian state news agency TASS, the Russian Football Union (RFU) is set to be present at the Congress, despite the country's national teams and clubs being banned from all UEFA competitions due to the war in Ukraine.

Russia and its ally Belarus have faced widespread condemnation for the invasion of Ukraine, which Moscow claims is a "special military operation".

The International Olympic Committee has recommended that athletes and officials from both countries are banned from international sporting competitions and all remaining events in the nations moved elsewhere.

According to the United Nations, at least 3,459 civilians have been killed since the beginning of the military offensive on February 24, although it is feared that the true figure is far higher, and more than 5.9 million people have fled Ukraine.

UEFA also ruled Russia out of hosting the men's Euro 2028 or Euro 2032 after its surprise late bid.

The RFU has suggested it could launch new challenges at the Court of Arbitration for Sport over the latest sanctions against its national and clubs teams.

The country has already been expelled from qualifying for the 2022 men's World Cup, with Poland awarded a bye in the European playoffs, and this year's men's Champions League final has been moved from Saint Petersburg to Paris.

Despite the sanctions, UEFA is one of numerous sports bodies which has allowed elected Russian and Belarusian officials to continue in their positions.

RFU President Alexander Dyukov is a member of the UEFA Executive Committee, and according to TASS took part in today's meeting.

The RFU remains an active member of UEFA, allowing it to be represented at tomorrow's Congress, as it was at the FIFA Congress in Doha in March.

Further sanctions against Russia have not been mentioned among the items on the agenda published by UEFA for its Congress.

A report from Slovenian official Čeferin and the Executive Committee, a report of UEFA administration 2020-2021, the financial report and statement from 2020-2021, approval of the 2022-2023 budget, an update on UEFA's Committees and the ratification of new members of the UEFA Organs for the Administration of Justice are due to feature at tomorrow's Congress.