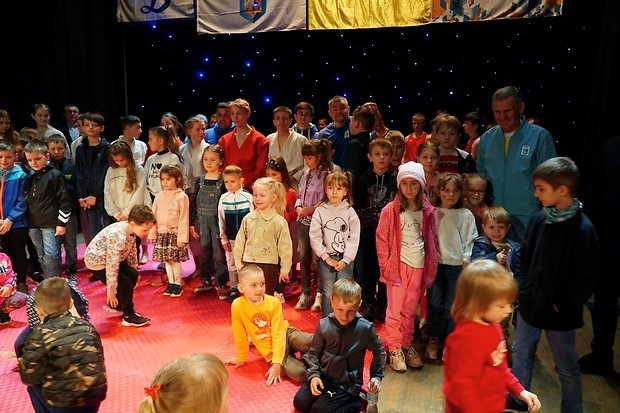 Ukrainian Olympians Iryna Shepetiuk, Valeriy Litanyuk, Viktor Polyakov and Servin Suleymanov attended an educational charity event for children from the country who have been displaced from their families.

The event, which was called "Ukrainian children - Ukrainian book", saw the youngsters taught about the Olympic Movement as well as being shown demonstrations of boxing and judo at the Ivano-Frankivsk regional school.

Suleymanov boxed at Sydney 2000 while Polyakov competed in the same sport four years later in Athens.

Litanyuk was the youngest Olympian to attend, with the 28-year-old participating in the men's 50 kilometre walk at Tokyo 2020 last year.

The gathering in the western city was also attended by Myroslav Karabin, the head of the National Olympic Committee of Ukraine in the Ivano-Frankivsk region.

Gutarina and Kosse are currently based at the school where they are continuing their training despite the Russian invasion.

The southern city of Mariupol has experienced some of the most devastating fighting since Russia invaded Ukraine on February 24.

An Associated Press investigation has claimed that approximately 600 civilians were killed, rather than 300, in a airstrike on a Mariupol theatre.

The mayor of Mariupol alleged last month that the number of civilian deaths had surpassed 20,000 as a result of a Russian siege.

It is widely reported that the final remnants of Ukrainian resistance in the city is coming from a steelworks factory.

The United Nations Human Rights Office believes the number of civilian deaths in Ukraine rose to 3,153 on Monday (April 2) but insisted the actual figure is likely to be considerably higher.

An estimated 12.7 million have become displaced, according to the United Nations Refugee Agency.

It reports that five million Ukrainians have travelled to other countries, while 7.7 million are displaced in the country.