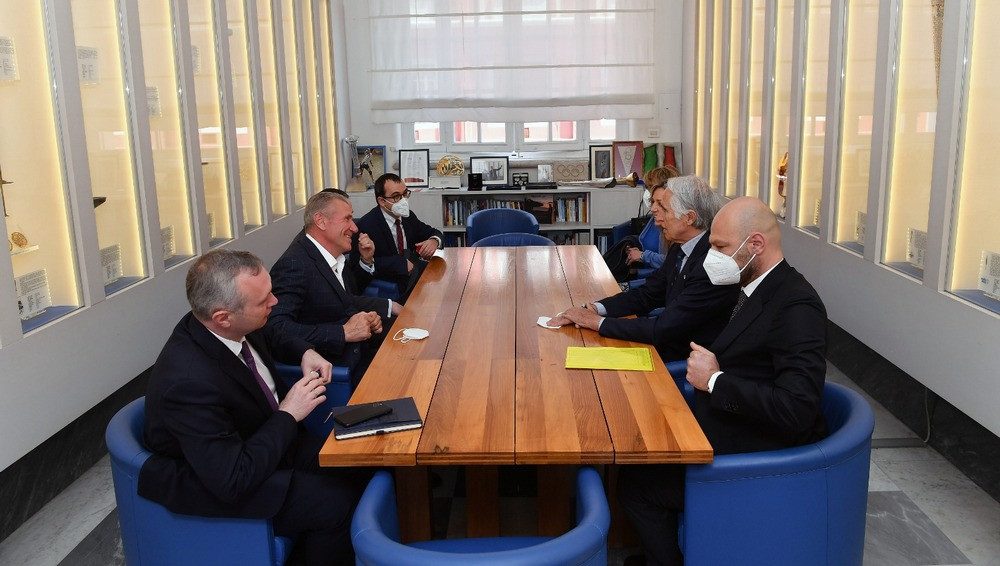 President of the National Olympic Committee (NOC) of Ukraine Sergey Bubka has been visiting other NOCs across Europe and expressing his gratitude for their solidarity.

The Seoul 1988 Olympic gold medallist was welcomed by the Hungarian Olympic Committee (MOB) in Budapest where he spoke to MOB President Zsolt Gyulay on the phone to thank him for the organisation's donations to Ukraine.

IOC member Bubka was then met by the Italian National Olympic Committee's (CONI) President Giovanni Malagò and the country's undersecretary of state with responsibility for sport Valentina Vezzali.

Bubka was joined by Ukraine's Minister of Youth and Sports Vadym Guttsait.

I’m grateful to @giomalago and @vvezzali all Italian Olympic family, IOC President Tomas Bach @thomasbach76, CONI President Giovanni Malago, the Cabinet Undersecretary in charge of sports for Italy Valentina Vezzali and all the National Federations for their precious assistance.

Malagò and Bubka are due to visit the Giulio Onesti Olympic Preparation Centre today in Rome with CONI secretary general Carlo Mornati.

They are set to meet a group of Ukrainian athletes in taekwondo, rowing and fencing who are training in Italy as part of the Italian National Federations' solidarity initiatives.

A total of 20 National Federations in the country have given hospitality to Ukrainian athletes to help them prepare for upcoming international events.

The Slovak Olympic and Sports Committee has also displayed its solidarity for Ukraine, with more than 400 athletes being welcomed to Slovakia after the Russian invasion.

"Sports clubs in Slovakia have opened their facilities to children and their parents, often including coaches, who have had to leave Ukraine," said Jozef Liba, secretary general of the Slovak Olympic and Sports Committee.

"Also in this way they help them to adapt and forget the sad events that are taking place in their country and are negatively affecting their psychological state.

"Representatives of sports clubs also help refugees from Ukraine materially, providing them with accommodation and food.