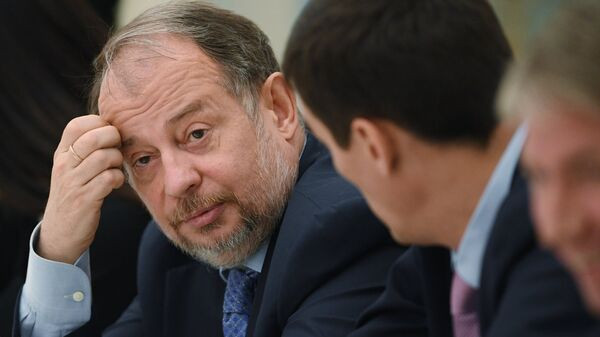 Ukraine has warned that it will refuse to accept financial help from the International Shooting Sport Federation (ISSF) if it is provided personally by President Vladimir Lisin, Russia’s richest man, who it has accused of being involved in the war against their country.

In a strongly worded letter to the shooting community, the Ukrainian Shooting Federation (USF) claim that a previous correspondence calling for an extraordinary meeting of the ISSF to discuss the position of Lisin and secretary general Alexander Ratner, another Russian, "was ignored".

In the latest letter, which insidethegames has obtained a copy of, USF President Oleg Volkov insists that action needs to be taken against Lisin, "a personal friend of Russia’s President [Vladimir] Putin."

"We would like to state our point clearly a call a spade a spade," Volkov writes.

"The complicated situation in the world is the war with which Russia has invaded Ukraine, destroying thousands of towns and villages, killing children and women, killing civilians.

"A large number of military weapons are transferred to Ukraine through Belarus.

"Missiles of all possible calibres and range capabilities fly to Ukraine from the territory of Belarus.

"Russia’s official information agencies publish articles of journalists who are close to the Russian leadership with calls to destroy Ukraine as a state and Ukrainians as a nation.

"More than a month ago, we demanded that the ISSF evoke an extraordinary meeting of the Assembly and dismiss representatives of Russia and Belarus from leadership posts in the Federation.

"Our demand was ignored and received no answer.

"We would like to point out that while we have no personal claims towards Mr Lisin, we consider it impossible that he, a personal friend of Russia’s President Putin, the director of a large iron and steel works which steel for tanks and cannons, be the head of the ISSF at such a crucial moment for the world, when Russia is blackmailing the world with nuclear weapons and is leading it to the brink of a third world war."

Lisin is the chairman and majority shareholder of Novolipetsk, one of the largest steel companies in Russia, a position that the USF claims makes it impossible for him to maintain his role as ISSF President.

"Once again the Ukrainian Shooting Federation suggests holding an extraordinary report back election meeting of the ISSF’s Assembly," Volkov writes.

"We ask you to support our standing."

Last month, the ISSF promised to provide financial assistance to the USF to enable it to be competing in international events, including the World Shooting Championships, due to take place in Cairo in October.

"The Ukrainian Shooting Federation will receive such financial assistance with gratitude solely from the ISSF," Volkov writes.

"If such financing is planned personally from V. Lisin, Ukraine refuses to accept it."

insidethegames last week revealed that Lisin had lost 30 per cent of his personal wealth in the last year, most of it since the Russian invasion of Ukraine began on February 24.

Lisin is now worth $18.4 billion (£14.1 billion/€16.9 billion), compared to $26.2 billion (£20.3 billion/ €24.4 billion) 12 months ago, although he has regained his position as Russia’s richest man as every oligarch has been badly hit by the economic sanctions imposed since the country launched its war and he is still among the 100 wealthiest people in the world.

Unlike other oligarchs, Lisin has not been placed on any sanctions lists since the start of the war in Ukraine and the International Olympic Committee has not so far called upon elected Russian officials to step down at International Federations.

Lisin has been among the most-outspoken critics of Putin’s decision to invade Ukraine, including the effect it will have on Russia’s economy.

He still faces calls to step down from the ISSF.

Canada, Czech Republic, Denmark, Estonia, Finland, Italy, Germany, Great Britain, Norway, Slovenia, Sweden and United States are among countries to have sent letters to the ISSF calling on Lisin and its secretary Ratner, to vacate their posts.

The ISSF did not respond to a request for comment from insidethegames.