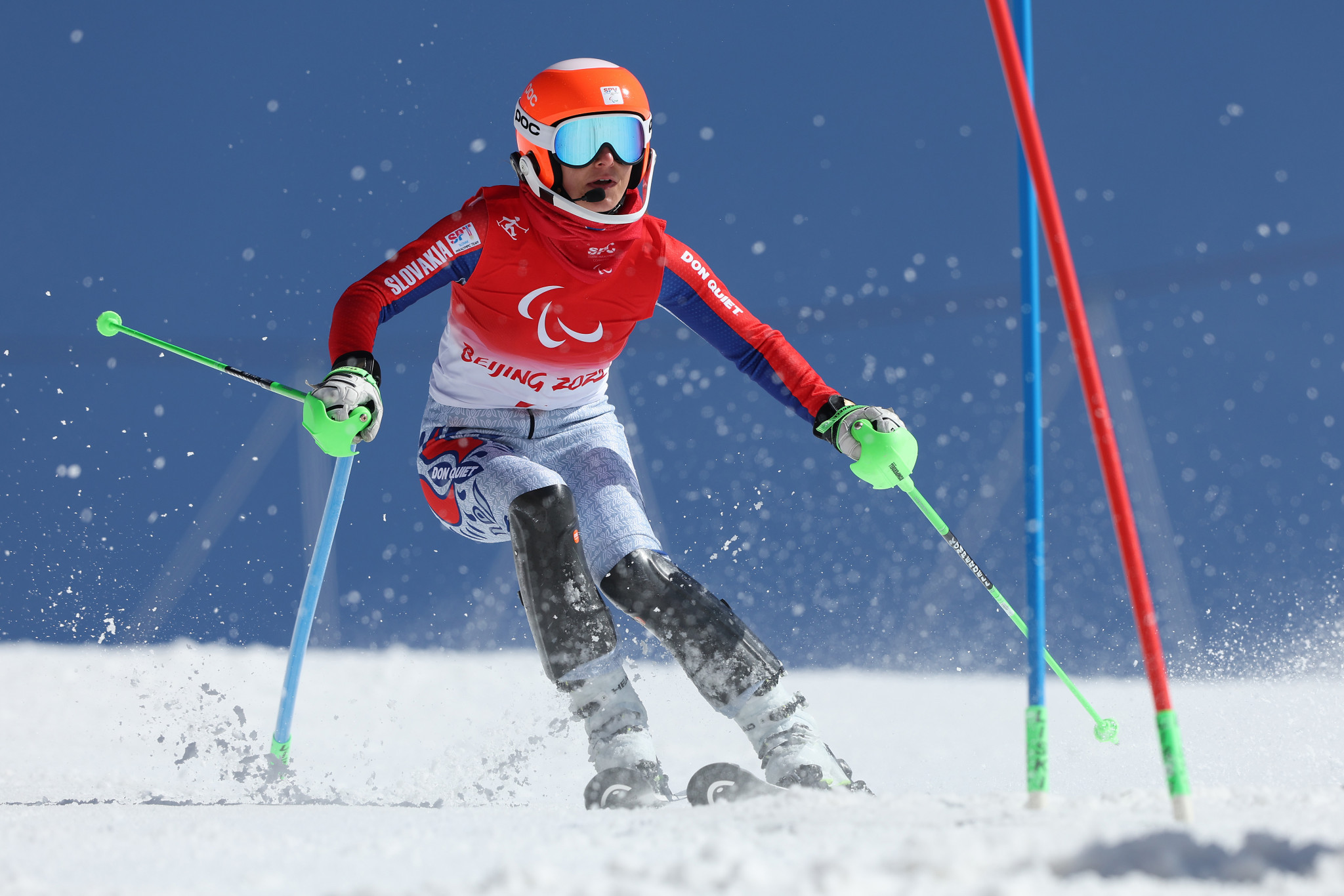 Today was originally scheduled as a rest day, but organisers brought the events forward by 24 hours due to "high temperatures and high risk of snow melting".

Slovakia's Farkašová won four gold medals at Pyeongchang 2018, and her downhill victory on Saturday (March 5) made her a 10-time Paralympic champion.

She suffered a shock crash as the red-hot favourite in the super-G yesterday, but can now add another gold to her collection after successfully defending her women's vision impaired title in the discipline at the Yanqing National Alpine Skiing Centre.

Farkašová, guided by Michal Cerven, overturned a 1.92sec deficit to China's Zhu Daqing with a 44.82 run in the slalom for a total time of 2min 3.39sec.

Zhu was 0.86 further back in second, with Britain's Menna Fitzpatrick collecting her second medal of the Games with a 2:05.98 effort earning bronze.

Bauchet of France had to settle for four silvers at Pyeongchang 2018, but he has the winning habit at Beijing 2022, following up yesterday's super-G triumph with another impressive win in the men's standing class.

Finland's Santeri Kiiveri in second was more than four seconds further back, while Adam Hall of New Zealand did it the hard way in clinching back-to-back Paralympic bronze medals in the super combined.

Hall was ranked 15th after the super-G, but a superb 39.44 in the slalom propelled him up to third place.

Théo Gmür of Switzerland, a triple gold medallist at Pyeongchang 2018, was second at the midway stage but disqualified in the slalom.

As he did in the super-G yesterday, Norwegian Pedersen rounded off the day's Para Alpine skiing action with a gold.

World champion Jeroen Kampschreur of The Netherlands was 1.70 off the pace in third after the super-G, but a terrific 38.52 in the slalom posed a challenging time of 1:50.51 for Pedersen to beat.

Niels de Langen, also of The Netherlands, rounded off the top three in 1:53.40, with Japan's Taiki Morii missing a gate and consequently missing the podium for the first time at Beijing 2022.

In the other three classes, the slalom proved decisive and led to a change in leadership.

Germany's Anna-Lena Forster is something of a slalom specialist.

She won slalom and super combined gold at Pyeongchang 2018 and at the World Championships in Lillehammer earlier this year.

A 1:26.44 run left her fourth after the super-G in the women's sitting, but her time of 44.93 in the slalom was more than six seconds quicker than the rest of the field and helped her climb from fourth into the gold medal position.

A more cautious 51.77 run from Momoka Muraoka of Japan, the leader at the halfway point, denied her a third gold medal at the Games, although a 2:12.14 was enough for silver.

Liu Sitong of China was 4.47 off the pace in third.

Sweden's Ebba Årsjö won her second medal and first gold on her Paralympic debut with a stunning victory in the women's standing.

She trailed super-G champion Zhang Mengqiu of China by 2.25 going into the slalom, but a 40.49 from Årsjö proved too good and handed her victory by 1.51.

Zhang earned silver, with Canada's Alana Ramsay clinching a second bronze in as many days after finishing in 2:12.17.

Eight-time Paralympic gold medallist Marie Bochet of France won super-G silver yesterday after crashing out of the downhill, but there was more frustration at these Games for her.

Bochet was third after the super-G, but a mistake early in the slalom gave her too much to do, and a 2:12.17 total was only enough for fifth place.

The day's other winner was Italy's Giacomo Bertagnolli, who clocked 39.09 in the slalom to finish in 1:49.80 in the men's vision impaired.

He took advantage of Hyacinthe Deleplace of France's woes.

The world champion held a comfortable 1.53 lead at the top, but a stumble in the slalom forced him out of the medal positions.

Johannes Aigner of Austria stayed second in 1:51.98, while Britain's Neil Simpson followed up yesterday's super-G victory with a bronze in 1:52.81.

As a result of the change in schedule, Para Alpine skiers now have at least two days of rest before competition returns on Thursday (March 9) with the men's giant slalom.